Actor Jeffrey Weissman joins Matt this week to discuss his unique experience of playing George McFly in Back to the Future Part II and III after Crispin Glover left the films. Jeffrey tells us about the mix of acting and impression that went along with playing the role, being in a weird place as the new replacement on set, and hearing Crispin’s thoughts using his likeness. We also hear about Jeffrey’s other roles in Clint Eastwood’s Pale Rider, Johnny Dangerously, Twilight Zone: The Movie, and Saved by the Bell. Plus, writers Ben Acker and Ben Blacker of The Thrilling Adventure Hour join Matt to talk about their novel, ‘Star Wars Join the Resistance,’ what it’s like to work with the Lucasfilm story group, and Matt becoming part of the Star Wars canon.

This episode is brought to you by Hullo (www.hullopillow.com/IWTT). 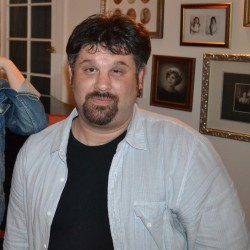