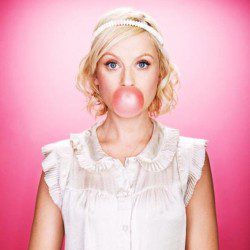 Amy Poehler was recently named one of TIME Magazine’s 100 Most Influential People of 2011, and for good reason. Amy has written and performed for influential shows such as Upright Citizens Brigade, Saturday Night Live, and most recently Parks and Recreation. From Colby to Leslie Knope, Amy has been bringing the funny consistently for over a decade and has the love and support from the world to prove it.

Amy Poehler and Julie Klausner are a fabulous duo of writers, performers, and producers who recently collaborated on the Hulu series “Difficult People” (Julie as its creator and star, Amy as executive producer). This week they join Sarah and Susan for a New York edition of Crybabies! They talk about Stephen Sondheim’s “Sunday in the Park with George,” Bette Midler’s “The Rose,” Anita Hill, and Terms of Endearment.

Cancel all your plans because Amy Poehler is back along with co-host Neil Campbell for a post-Emmys chat on today’s Comedy Bing Bong! Amy gives us a sneak preview of the new season of Parks and Recreation, tells us about the reality shows she’s working on, and shares some important advice on improv. Then, special guest Alan Thicke stops  by to talk about what it was like on the set of “Growing Pains,” if he ever competes with his son over women, and he performs his very own Parks and Rec theme song. Plus, Scott, Amy, Neil, and Alan go head to head to be crowned G.O.A.T. in the Freestyle Rap Battle!

We’ve gathered some of our favorite What’s Bothering You? segments for this week’s special bonus episode of improv4humans which features an all-star roster of improvisers which includes Eugene Cordero, Pamela Murphy, Billy Merritt, Andy Daly, Stephanie Allynne, Chris Kula, Sean Clements, Neil Campbell, Dominic Dierkes, Amy Poehler, Seth Morris, Joe Hartzler, Lennon Parham, Danielle Schneider, Horatio Sanz, and Brian Huskey. We’ll look back at some of the topics that have been discussed such as the use of Twitter during the Boston marathon tragedy, Oscar Pistorius shooting his girlfriend, and the epidemic of ceiling fan suicides. Attention humans, go out and interview your fellow citizens and find out what is bothering them, then send it to the show so it can be played on an upcoming episode of improv4humans! You can now get the UCB Comedy Improv Manual, Matt Besser’s new comedy album at mattbesser.com, and Dragoon’s new album at dragoongalaxy.bandcamp.com!

Ian Roberts & Amy Poehler join Matt Besser for the 3rd & final installment of improv4humans LIVE from the 15th Annual Del Close Marathon in New York! Get ready for the most intense tickling of your life, beautiful French singing, and proof that the UCB Comedy Improv Manual is useful for any improviser. Attention humans, please go to the Earwolf forums to let us know which scenes should be in our next Best of improv4humans episode! You can now get the UCB Comedy Improv Manual, Matt Besser’s new comedy album at mattbesser.com, and Dragoon’s new album at dragoongalaxy.bandcamp.com!

Jeff could not believe that Amy Poehler existed the first time they met. Amy explains why the podcast is like the new student film, shares some of the cool questions her children ask her, and tells us what kind of advice the older version of herself would give her present self. It’s a delightful conversation filled with talk of writing, bar mitzvahs, and public nudity.