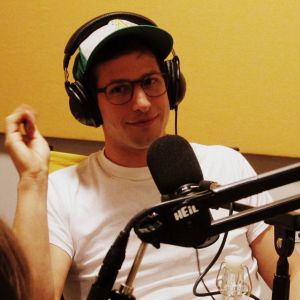 Andy Samberg is both a cast member on Saturday Night Live as well as part of the music comedy revolution known as The Lonely Island. In his short career, Andy has starred in the hilarious movie Hot Rod, found himself in a battle with Mark Wahlberg, and turned Justin Timberlake into a major force in comedy. You can find The Lonely Island’s music at every party you will ever attend ever.

Friend of the show Andy Samberg returns to talk to Scott about the series finale of Brooklyn Nine-Nine, recall the lyrics to Hollywood Facts, and take a much needed plane break like the old days of CBB. Then, cow farmer Dusty stops by to talk about his daily routine on the farm. Plus, The Answer Seeker drops by to turn the tables on Scott and ask him some questions.

Andy Samberg of Brooklyn Nine-Nine and Saturday Night Live fame is back to talk to Scott about his movie Palm Springs including working with J.K. Simmons and how Cristin Milioti was cast. The Sloppy Boys (Mike Hanford, Tim Kalpakis, Jefferson Dutton) play songs off their new album “Paradiso.” Plus, newcomer to LA, Barry Sams stops by to anonymously air grievances about his neighbors and singer-songwriter John Lennon returns to talk about his volunteer work.

Andy Samberg of Brooklyn Nine-Nine and Saturday Night Live fame is back to talk to Scott about his filmography, the origin of the character name Jake Peralta, and what we can expect on the new season of Brooklyn Nine-Nine. Then, Nick Kroll stops by to talk about his new movie Olympic Dreams, which was filmed on location at the Olympics. Plus, Becky from the gym returns to discuss her new rocky romantic relationship with her boss Shannon.

This episode is brought to you by Legal Zoom (www.legalzoom.com code: bangbang), Zoro.com (www.zoro.com/bangbang), and Stamps.com (www.stamps.com code: BANGBANG).

Andy Samberg of Brooklyn Nine-Nine and Saturday Night Live fame is back to talk to Scott about the new season of Brooklyn, their dream SNL cast, and which musician would they switch professions with for a whole year. Then, Mayor Junius Bobbledoonary stops by to inform us about being a part of the ancient race of little people that live inside the walls. Plus, former pro-skater Derek Contrera arrives to talk about why he left the world of extreme sports to become the next great American entrepreneur.

Popstar: Never Stop Never Stopping star Andy Samberg is back with Scott and the co-hostess with the mostess Claudia O’Doherty for a rare Comedy Bang! Bang! After Dark episode. Claudia pitches an incident heavy film for Andy right before famous Australian actor R. Schrift pops in to give us a preview of his new drama sketch show Sunday Afternoon Taped. It’s pretty electric.

This episode is sponsored by Black Tux.

This episode is sponsored by RePlay on go90.