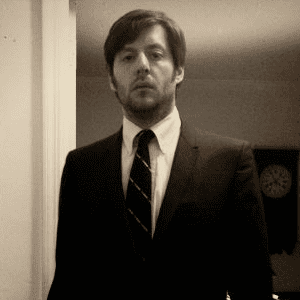 Anthony Atamanuik has been writing, performing, and producing comedy for over ten years. In 1997 he moved to Los Angeles after graduating with a BS in Film Theory from Emerson College. While living in LA Anthony worked for Jim Henson Interactive , Mr. Show , and sadly, Suzanne Somers.He moved to New York in 2000 and started training and performing at the Upright Citizens Brigade Theatre in 2002. Anthony has trained with Matt Walsh, Matt Besser, Owen Burke, Billy Merritt, Kevin Mullaney, Seth Morris and others.He has performed with various Harold Teams including Creep and performed with the acclaimed Instant Cinema. Anthony is currently performing with the critically acclaimed and award-winning weekend team Death by Roo Roo on Saturday nights , he is also a regular performer in ASSSSCAT 3000 on Sunday night, Anthony also performs in his one-man variety show, the Tony and Johnny show, Tuesday nights at 9:30PM, and every Wednesday he makes movie magic with Neil W Casey in the Two Man Movie.He has played various roles in Adult Swim’s “Fat Guy Stuck in Internet”, he as also appeared on Late Night with Conan O’Brian, The Caroline Rhea Show, The Reggie Watt’s Live at Central Park Comedy Central Special and in a very special DVD extra on Todd Barry’s Comedy Central Special. For the last 7 Seasons, Anthony can be seen on NBC’s 30 Rock , playing a very expressive staff writer who doesn’t speak.

Danielle Schneider, Anthony Atamanuik, and John Gemberling join Matt Besser for a LIVE improv4humans from SXSW! They take audience suggestions that inspire scenes about being appreciated for wristband work, an experimental Worf algorithm, tripping True West actors, a Gary Larson biopic, and so much more!

Adam Pally, Jon Gabrus, Anthony Atamanuik, and Gil Ozeri join Matt Besser for an improv4humans 420 special! They’ll perform stoned scenes about a Utah dispensary, a restaurant where the waiters get roasted, and a terrible new TruTV travel show. Plus, a house with a non-magical closet, Universal Studio’s latest attraction, and why everyone is tripping on shrooms these days.

529 — The Beatles Get Back Reunion

It’s the reunion show you’ve been waiting for – join host Andy Cohen and Beatles expert Brett Morris as they gather John, Paul, George, and Ringo back together once again to discuss the highs, lows, and controversies in the ‘Get Back’ documentary. Hear the behind-the-scenes scoop on their wardrobes, drug usage, what really happened at George’s house, the truth behind their yellow drinks, and a tribute to the legendary rooftop concert; plus, an exclusive jam session from the Fab Four themselves.

Toni Charline and Anthony Atamanuik join Matt Besser this week for scenes about a friend with a moon suit, bad bids on The Price Is Right, pretentious animal videos, and more!

John Gemberling, Lisa Gilroy, and Anthony Atamanuik join Matt Besser for a special Wonder Woman 1984 rewatch episode! We’ll see how the cops deal with Wonder Woman’s collateral damage, how she got her archaeology job, and what happens when Cheetah meets the rest of the DC villains. Plus, something is wrong with Wonder Woman’s Pegasus, an argument erupts onboard the Invisible Jet, and a local citizen refuses to renounce their wish.