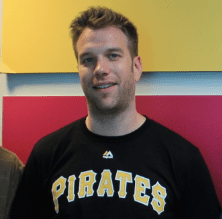 Jeselnik was a writer for Late Night with Jimmy Fallon in its first season and hosted a Comedy Central Presents in 2009. After releasing his critically acclaimed debut album Shakespeare in 2010, he began writing for the Comedy Central Roasts and moved up to performer in the 2011 roast of Donald Trump. He continued to perform on the roasts of Charlie Sheen and Roseanne Barr in 2012. In 2013, Jeselnik hosted his own Comedy Central series, The Jeselnik Offensive for two seasons, and released his second album, Caligula, which doubles as an hourlong standup special.

One of the Original Titans of Comedy, Anthony Jeselnik joins Scott to talk about baseball, his new show Good Talk, and on the spot politics. Then, children’s author Maximilian McSillystein stops by to promote his new book of nursery rhymes. Plus, motivational…

Uh oh, it's supernatch v. supernatch at Camp Crystal Lake when Jason meets Telekinetic Tina in Friday The 13th Part VII: The New Blood. Anthony Jeselnik joins Gourley and Rust to defend this as the finest film of the franchise, nay, of…

Bad boys Nathan Fielder and Anthony Jeselnik aka two-thirds of the Titans of Comedy return to speak on friendship, the difference between what's real and a joke on Nathan For You, and the meaning behind the title of Anthony's new Netflix special…

Pulling your card with Anthony Jeselnik.

This past weekend, arguably the largest event in sports was held. That's right, we're talking about the Super Bowl and we've invited Anthony Jeselnik, one of the most brutal roast comics there is, on the show as we discuss the legitimacy of…