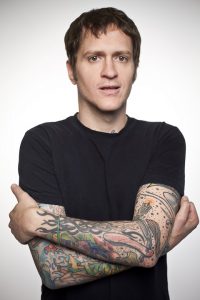 Ben is a prolific stand-up comedian and his 2012 comedy album I Got Demons was featured in LaughSpin’s top comedy albums of the year. In 2010, Ben performed in the Just For Laughs Montreal “New Faces” showcase and received high accolades for his performances. He was also invited back to the festival in 2012 where he taped a “Funny As Hell” set for HBO Canada.

Actor, comedian, and musician Ben Roy joins Howard and Kulap this week to discuss open mic fests and to dish on his band Spells. During the Music Chart, we hear about the joys of Philadelphia and Ariana Grande's entrepreneurial spirit. Ben shares…