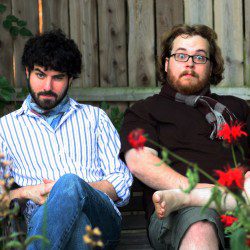 Bob and Dan Cast is a recorded conversation between two men that should have better things to do with their time. After languishing in the world of academia, both left their Illinois homes and went to opposite coasts to pursue degrees in film. Having achieved said degrees, they moved back to Illinois and promptly forgot about their Hollywood ambitions. This podcast is the stopgap between what they want to do and the current reality in which they live. Dan is pretty sure he would be some kind of monster without the creative outlet. Bob tends to agree.

Four podcasts become three as we reach the end of the week. Only one podcast is safe this week making it one of the toughest eliminations yet. Who will go home? You’ll have to listen to find out. And as always, leave your thoughts and critiques on our forums.

Both Doug Benson and Harris Wittels are experienced podcast guests. Knowing what they know about podcasting and Nick Thune, what will they think of each show’s four minute submission? Only four shows remain, so no nit will go unpicked as we prepare for tomorrow’s elimination episode. Tune in tomorrow to see who is going home and which three podcasts will continue in the search for Earwolf’s next great podcast!

There is a good chance that some of you listeners found this show because of Paul F. Tompkins, Marc Maron, Paul Scheer, or some of our other well-known guests. This week we see how each of the contestants handle 10 minutes with comedian Nick Thune. Matt gives the contestants valuable advice on approaching guests with respect, so tune in tomorrow to hear how everyone fares with guest judges Doug Benson and Harris Wittels. Also, let us know on the forums if you would like a bonus behind-the-scenes episode.

For the first time ever, fewer podcasts are safe than are up for elimination. Who blew the judges away, and who confused and bemused them? We’re more than halfway done, so hold on tight as we finish up the search for Earwolf’s next great podcast!

The challengers have three-and-a-half minutes and no introduction to get our judges on board. How will they fare when Matt, Jordan Morris, and Kulap Vilaysack “commentate” on their mini-episodes? Learn who makes the bottom three and who is going home tomorrow on The Earwolf Challenge.

With the competition now cut in half, we return to a trusty old challenge: Concepts and Content. Only it’s a little bit different this week: They can’t pull from the archives, and they don’t get to introduce the clip! This week’s coaching session takes on a different tone as Matt emphasizes marketability to the contestants. We’re taking your suggestions to heart so leave feedback on the Earwolf forums and join us tomorrow as we bring in guest judges Kulap Vilaysack and Jordan Morris.