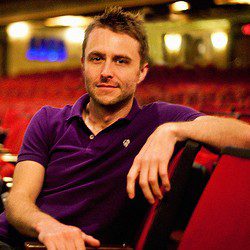 Chris Hardwick is a big ol’ nerd. Yet somehow instead of getting his glasses broken and playing D&D silently in his basement, he’s used his nerditude to create a hyper successful podcast, a very popular blog, and a highly anticipated upcoming book. He also hosts G4’s Web Soup, frequently contributes to Wired magazine, and performs with Mike Phirman in the musical comedy duo Hard ‘n Phirm. What a geek!

Chief Nerdist Chris Hardwick returns to The Wolf Den for the first time in four years. He and Jeff get caught up with everything going on in the Nerdist world, and how Chris keeps on top of having a podcast, a Comedy…

The Nerdist Chris Hardwick explains Tattle Rock to us on this week’s Who Charted! Chris talks about Lion King raves, his new Hard ‘n Phirm video Gersberms (Yer Gervin Mah), and banks run by E.T.s during the Billboard Hot 100 Chart. The…

Every once in a while a bro might want to come hang out so who better to stop by than the Nerdist himself Chris Hardwick on today’s special mid-week episode of Comedy Bang Bang! Chris tells us about his upcoming Comedy Central…

Are you dreaming of a white Christmas? Well, even if you aren't walking in a winter wonderland you can treat your ears to a holly jolly time with Candy, Cora, Seedy, and our new friend Barry O'Metric. Join us this week as…

Who Is The Nerdist?

It seems like every time you click refresh on the Nerdist website there is new cool stuff happening. What started as a blog and transitioned into a podcast is now a television pilot, a live performance space at Meltown Comics, a podcasting…

If you're going to get nerdy about sports, you must invite the boys of Nerdist! Matt Mira and Chris Hardwick step away from their Doctor Who dvds and Wired magazines to bring their unique perspective on Boston and bowling. We get a…

Get your Hollywood insider information this week on Comedy Bang Bang! Matt Braunger and Chris Hardwick take time away from creating their new T.V. pilots to stop by the Earwolf studios. They talk about performing stand-up on television, what goes into making…

Season of the Witch

Nic Cage makes his first (but almost definitely not last) appearance on How Did This Get Made with Season of the Witch, a psuedo-religious buddy movie set during the black plague. Chris Hardwick joins the HDTGM crew to experience the inconsistent accents…

I know a lot of you have been complaining about the fast paced comedic nature of the show, so we thought we'd bring in Nathan Brantley from Morning Becomes Eclectic to slow the pace down a bit. It's kind of hard to…