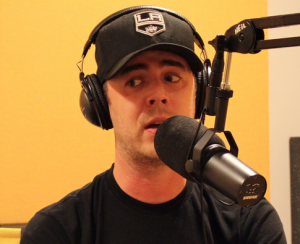 Colin Hanks is one of the most talented actors around. Who else could star in the ridiculously goofy comedy Orange County AND steal scenes as Father Gill in Mad Men? A second generation movie star, Colin has appeared in such varied works as King Kong, Roswell, and Tenacious D in The Pick of Destiny.

Colin Hanks ("Life in Pieces") returns to chat with Kevin, and this time... it's personal. This episode is brought to you by LightStream (www.lightstream.com/CHAT).

Digging in the crates with Colin Hanks. This episode is brought to you by SeatGeek, Quip Toothbrush (www.getquip.com/PARDO), and Peter Millar (www.petermillar.com/PARDO).

Welcome back to The Black List Table Reads with Franklin Leonard. Popular demand called for it, and we listened: Each earmovie is now a single episode. Today, we come to the end of our Season 1 earmovie binge-a-thon with our fourth earmovie…

It's a Fuller House as fan favorite Colin Hanks returns to the show along with Jesse Hughes and Josh Homme of Eagles of Death Metal on this week's B-B-B-ONUS Comedy Bang! Bang! Join them as they reminisce about the good ol' days…

It’s a jam-packed episode of The Black List Table Reads with Franklin Leonard this week with the thrilling conclusion of Chrome Noir. You’ll also hear an in-depth interview with the robot film noir’s writer Kent Tessman as well as a huge announcement…

This week on The Black List Table Reads with Franklin Leonard, things get more exciting in part three of Kent Tessman’s Chrome Noir. A film noir detective story with robots that will have you riveted. Bringing the world of Chrome Noir to…

Kent Tessman’s Chrome Noir continues on this week’s The Black List Table Reads. Men in hats. Tommy guns. Robots. A film noir detective story that will have you riveted. Bringing the world of Chrome Noir to life is Colin Hanks, Zachary Levi,…

A Dental Convention in Scottsdale, Arizona: Live from Largo

Paul F. Tompkins welcomes Los Angeles AND the internet to the first LIVE episode of Spontaneanation recorded at the world-famous Largo at The Coronet! This time Paul’s special guest is actor Colin Hanks of Orange County & Fargo! They chat about why Colin chose to wear the outfit he had on that…

The Sklars kick off this week's show with takes from around the sports world wherein they discuss a very crooked tow company, a football player that engages in sexual acts a little too close to home, and the proper way to handle…

Comedy Bing! Bong! makes its way back to the South by Southwest Festival in Austin, Texas and Scott brings along his nephew Todd to serve as today's co-host! They welcome two of America's finest actors, Colin Hanks & Nick Kroll to the…

Returning champion Colin Hanks of FX's Fargo is here to talk about his humble beginnings on Comedy Bean Bag! Colin tells us all about one of his first acting roles on Roswell, the status of his Tower Records documentary, and the record…

Actor, comedian, and all around great guy Colin Hanks chats with Har Mar backstage from The Fitzgerald Theater in Minnesota on this week’s Nocturnal Emotions! Colin tells us about his recent entertaining haberdashery experience, the day he felt like he had take…

Once again it’s time to get into your viewing positions for another LIVE edition of THE FOGELNEST FILES! Recorded LIVE at UCB-LA, Jake Fogelnest welcomes Paul Scheer (The League), Colin Hanks (Dexter), and David Koechner (Anchorman) to talk about the time David…

With a cascade of puns, a round of "no, but" style improvisation, an appearance of cake bugs, and latent racism, this is a classic Comedy Bang Bang waiting to happen. Our guests are Colin Hanks and Myq Kaplan who match wits on…

That's One Way of Doing It

If you asked for festive characters and heavy-handed puns in your letter to Santa, than Christmas is coming early for you! Scott welcomes Colin Hanks to this special episode, along with a slew of popular guests. Cake Boss and El Chupacabra present…