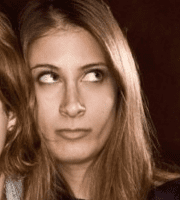 Corinne Marshall is a writer and comedian. After graduating from Columbia University in 2002, Corinne wrote for such saucy rags as PlayGirl magazine and Sweet Action while contributing jokes to the Nickelodeon kids quiz show pilot, Brainfart . Having done porn and children, she felt working for the CBS Evening News at the beginning of the war was the next logical step. The carnage she witnessed for 16 hours a day, every day via live feeds direct from the war zone, strengthened her belief in the dark, dark nature of man. Accordingly, she moved to Los Angeles to work in sitcoms. Corinne has written for the 2008 MTV Movie Awards, the 2008 Video Music Awards, Current TV comedy news show Infomania , Lil’ Bush on Comedy Central and The Andy Milonakis Show on MTV. Her book, The Q Guide to Will and Grace, about beloved NBC sitcom Will and Grace, is available in stores nation-wide and on-line via Amazon, Barnes and Nobles and other places that take your money.

From Playgirl To CNN!

Well Laimewads, we apologize. Our fantastic guest today - comedy writer, humanitarian, cook extraordinaire CORINNE MARSHALL came on and it took Elizabeth a full 50 minutes to ask her about her writing career with Playgirl! WTF?! Snafu accounted for this is a…