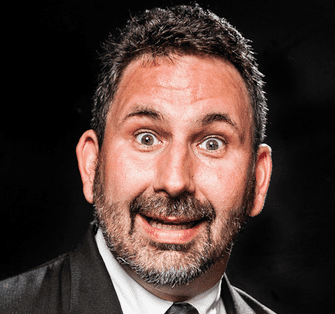 Craig Cackowski hails from the great state of Virgina, the Mother of Presidents, where he attended the venerable College of William and Mary. He first began improvising as a member of W. & M.’s troupe I.T., and moved to Chicago with a B.A. in Theatre, and an intent to become a serious actor. That quest was sidetracked after his first improv class with Charna Halpern at the Improv Olympic, and forever abandoned after studying for a year with the great Del Close, the guru of longform improv comedy. It was at iO Chicago that Craig first met and worked with Bob Dassie and Rich Talarico, in various groups and teams, including Mr. Blonde, Faulty Wiring, Baby Wants Candy, Close Quarters and The Armando Diaz Experience, Theatrical Movement and Hootenanny. Craig coached many teams in Chicago, including the long-running Frank Booth, and directed such shows as JTS Brown. Craig has taught for iO Chicago and iO West since 1995, and is the three-time winner of the Del Close Award for Excellence in Teaching.

7 — A Chicken in the Road, Linda’s Wallet and A Vincent Price Dinner Party with Craig Cackowski

This week on THE NEIGHBORHOOD LISTEN, a woman sends an SOS about a chicken in the road, Joan and Doug play The Newlywed Game and the tale of Linda’s wallet. Plus, “Dinner Has A Price” host Bat Mabb (Craig Cackowski) joins Joan and Burnt to talk more about his Vincent Price dinner party!

196 — Inside the Organist’s Room at a Baseball Stadium

Paul F. Tompkins wishes listeners a very Merry Christmas on a new Spontaneanation! This time out, Paul’s special return guests are The WorkJuice Players aka Craig Cackowski, Mark Gagliardi, Marc Evan Jackson, Hal Lublin, Annie Savage, and Little Janet Varney. Everyone chats about monkeys they’ve worked with then improvise a story set Inside the Organist’s Room at a Baseball Stadium. And as always, Eban (only the best) Schletter scores it all on piano!

This episode is brought to you by Palm (www.palm.com) and The Jim Jefferies Show Podcast.

The Scholar from the library of the Great Halls of Terr’akkas returns. And we meet an ogre as well.

Paul F. Tompkins is excited that Spontaneanation is happening once again! This time out, Paul’s special guest is actor Utkarsh Ambudkar of Game Over, Man! and Brockmire! Utkarsh chats about what he would name a star, being crushed after finding out how much his childhood toys were worth years later at a comic book store, and being fired from a Korean restaurant for eating the high-end food. Then, they are joined by improvisers Craig Cackowski, Colleen Smith, and Edgar Momplaisir, to improvise a story set in Joe’s Crab Shack. And as always, Eban (only the best) Schletter scores it all on piano!

Paul F. Tompkins wishes listeners a very Merry Christmas on Spontaneanation! This time out, Paul’s special guests are The WorkJuice Players aka Craig Cackowski, Mark Gagliardi, Marc Evan Jackson, Hal Lublin, Annie Savage, and Little Janet Varney. Everyone then shares which exotic pet they would choose between a Macaw, Tortoise, Boa, and Alpaca. Then, they all improvise a story set in an Airport. And as always, Eban (only the best) Schletter scores it all on piano!

San Francisco: Spontaneanation will be LIVE at the Marines Memorial Theatre on Friday, January 12th at 10pm as part of San Francisco SketchFest! For tickets go to www.paulftompkins.com/live