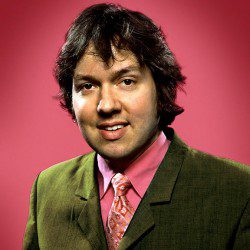 Dave Hill is a comedian, writer, musician and actor. He hosts the stage show The Dave Hill Explosion at the Upright Citizens Brigade Theatre in New York and Hollywood and recently starred in the television show The King of Miami on the MOJO HD network. The show is now airing on Film24 in the UK. Dave currently appears as on-air talent for HBO and Cinemax. He has also worked extensively for the comedy website Super Deluxe. In 2007, Variety Magazine named Hill one of their “10 Comics to Watch”. He appeared at HBO’s U.S. Comedy Arts Festival in Aspen, Colorado that same year. Hill was a member of the ’90s alternative band Sons of Elvis and Cleveland-based rock band Cobra Verde, and currently fronts the band Valley Lodge and plays guitar with Walter Schreifels’ solo band and Diamondsnake, a hard rock band also featuring Moby . He has also played bass for Lucy Wainwright Roche. Additionally, Hill is the creator and sole member of the semi-fictional Norwegian black metal band Witch Taint. Hill has also written for the New York Times, Salon.com, and Huffington Post among others and is a contributor to the public radio program This American Life. In June 2010, Dave launched his own podcast series called Dave Hill’s Podcasting Incident on iTunes and as part of the promotion for this he guest appeared on the podcast The Complete Guide to Everything. Dave is currently writing a book of essays to be published by St. Martin’s Press in 2012.

Negin is joined by comedians Dave Hill and Jena Friedman to discuss a recent white-haired addition to the 2020 presidential race, updates on the Mueller investigation, and Amazon’s recent decision to no longer move to NYC.   Follow Jena @ https://twitter.com/JenaFriedman Follow…

Recorded live from San Francisco Sketchfest, Adam Savage from MythBusters joins Sarah and Susan to talk about Chance the Rapper, crying at the finale of MythBusters, Haruki Murakami’s dystopian novel “1Q84,” The Abyss, and the musical Hamilton. Then, writer and author Mary…

Author, comedian, and musician Dave Hill joins Sarah and Susan to talk about musical legend Prince, Big Star's "Thirteen," memories of ice skating with his mother, The La's "There She Goes," Pedro the Lion's "Priests and Paramedics," and "Stairway to Heaven" by…

Randy and Jason start off the show by brainstorming proper punishments for the St. Louis Cardinals and revealing why sports paraphernalia is the best investment a fan can make. Then, the Sklars welcome to the show Dave Hill who discusses why LeBron…

Har Mar is back in full swing and is joined by amazing comedian, musician, author Dave Hill for the first episode of Year 2 of Nocturnal Emotions! They chat about Dave’s recent 6 hour book reading of “Tasteful Nudes,” hating band practice,…

This week’s episode of Who Charted? is full of quality ingredients! We welcome Dave Hill as he tells us about his run in with Drake during the Top Country Songs music chart! Dave lets us in on his movie watching techniques and…

This is an episode about human energy. Not juggling squirrel energy. New York-based comedian Dave Hill visits the hatch to discuss the connections between pregnant women and their children, and the living and deceased through the power of energy.