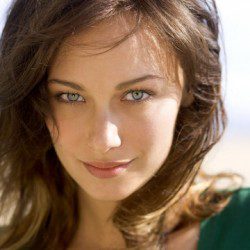 Deanna Russo is best known for starring in NBC’s 2008 reboot of the cult classic Knight Rider, as well as for her recurring roles on The Young and The Restless, Gossip Girl, and Rescue Me. Her most recent work can be found on the web in such projects as Wolfpack of Reseda for Fox, Tainted Love with Orlando Jones, and Burning Love, an ensemble parody of The Bachelor featuring Ben Stiller, Ken Marino, Michael Ian Black, and Kristen Bell. A New Jersey native, Deanna graduated from Rollins College in Florida with a degree in psychology. She grew up doing community theatre and continues to perform with her comedy team, Mahogany, at The Upright Citizens Brigade Theater and iO West. When not in front of the camera, Deanna also writes and directs. Her mockumentary, A Taste of Kream, won Best Narrative Short at the 2007 New Orleans Film Festival. Deanna also directed two seasons of a comic-strip style web series, Real Life with Married People, which shines light on the monotony of happily ever after.

Casey is down with the flu this week (RIP Casey) but Danielle is joined in her own nook by actress and New Jersey apologist Deanna Russo who gives us new insight into the garden state and the garbage people who inhabit it.…

She's a drop dead gorgeous actress, and model - a fave of ours from Burning Love - and is a total delight! The sparkling DEANNA RUSSO came on and discussed having worked in a car wash (like Elizabeth!) how a mystical necklace…