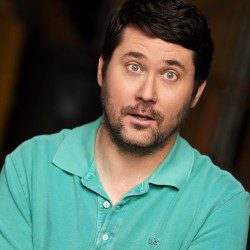 Doug Benson loves movies. So much, in fact, that he made his own movie Super High Me about marijuana, another thing he loves. His love of movies has also brought about his very popular podcast Doug Loves Movies, which has had notable guests such as John Lithgow, Simon Pegg, Ellen Page, and Ethan Suplee. He has three comedy albums available on iTunes and Amazon along with the television and podcast versions of his live show The Benson Interruption.

Doug Benson of Doug Loves Movies joins Paul, Jason and guest co-host Jessica St. Clair to discuss the 2017 science fiction film Valerian and the City of a Thousand Planets. Recorded live at the Theatre at Ace Hotel for Pee Cast Blast ’17, they cover everything from Rihanna as Bubble, a shapeshifting alien entertainer to the movie resetting itself every 15 minutes.

Check out our tour dates over at www.hdtgm.com!

This episode is sponsored by Mack Weldon (www.mackweldon.com/THEBOYS), hims (www.forhims.com/THEBOYS), and Away (www.awaytravel.com/THEBOYS20 code: THEBOYS20).

Gilbert and Frank are joined by comedian, podcaster and movie obsessive Doug Benson (“Doug Loves Movies”) for an enjoyable conversation about bad sequels, booking dream guests, breaking into the business and the perils of meeting Hollywood heroes. Also, Harry Dean Stanton shuts it down, Doug messes with Harrison Ford, Peter Falk reunites with Alan Arkin and Gilbert (once again) rags on Ferris Bueller. PLUS: Foster Brooks! “Captain EO”! The Three Stooges in 3-D! “The Curse of the Pink Panther!” Praising Alexander Payne! And Doug reveals the truth behind the Mr. Belvedere mishap!

It’s a two-hitter special as the hilarious comedian Geoff Tate brings along Doug Benson (Doug Loves Movies) to talk about pitching movies in a new comedy game show for Screen Junkies and to dig into some crazy County stories. Daniel Van Kirk brings County Stories which includes a man being accused of defecating on a scanner at a Kroger in Cincinnati. Plus, Nicolas Cage leaves us a voicemail regarding the 2016 Rio Olympics.

This episode is sponsored by Blue Apron, Zappos, and Legal Zoom.

Doug Benson loves movies more than you. Doug’s podcast “Doug Loves Movies” has even given Leonard Maltin street cred thanks to the popularity of “The Leonard Maltin Game.” Doug joins Leonard this week to discuss his lifelong love of movies and one of his recent favorites, Bone Tomahawk starring Kurt Russell.

This week, Randy, Jason, and Daniel Van Kirk reveal why flying is reason enough to abandon acceptable human behavior. Then, Doug Benson joins the show to discuss the affects of drugs and alcohol on an audience, as well as a comedians ability to develop a broad demographic that can still relate to one another. Then, Daniel covers stories that include a man who can’t resist the seductive purr of a cougar, why the best time to propose to your girlfriend is during an armed robbery, and why you should never shoot a gun at a hard shelled animal. Lastly, Michael Kissick leaves a voicemail that spawns the invention of “Friend Tinder.”