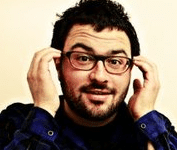 Eliot Glazer has trained under Will Hines, Charlie Todd, Joe Wengert, and Bobby Moynihan. He co-hosted and co-produced the variety show, High School Talent Show (2007-2010), with his sister, Ilana.

He has written for Billy on the Street and Best Week Ever, and currently writes, produces, and stars in “Eliot’s Sketch Pad,” a sketch comedy series on Above Average, the YouTube channel of Lorne Michaels’ production company, Broadway Video.

He co-created and stars in the cult favorite web series€™ “Haunting Renditions” and “It Gets Betterish,” the latter of which has been profiled in The New York Times, The Wall Street Journal, and Blackbook Magazine, and landed Eliot as one of OUT Magazine’s annual 100 most influential people in the LGBT community in 2012.

Most recently Eliot starred in and produced several digital shorts in support of HBO’s “Looking,” and is currently hosting the shows official podcast. He can soon be seen on season two of Comedy Central series Broad City, and on stage performing Haunting Renditions Live at Union Hall in Brooklyn in addition to Mashterpiece Theater at the UCB Theater.

Eliot Glazer (Broad City, Teachers) joins Jess and Zach for an all new musical packed with British young singles, reality show drama, federal agents, and more! With songs like “Are We Gonna Get Mental Tonight Bruv?”, “What We Need Is Love”, and…

Eliot Glazer (Broad City) joins the guys this week to do a deep dive on the Golden Girls, sudden long term relationship endings, and Teri Polo, Teri Polo… & more Teri Polo. If you have love, sex, coming out, or any kind…

Eliot Glazer (Broad City) joins the guys this week to do a deep dive on the Golden Girls, sudden long term relationship endings, and Teri Polo, Teri Polo... & more Teri Polo. If you have love, sex, coming out, or any kind…

Actor and writer Eliot Glazer (Broad City, New Girl) joins Andrew to talk about how he’s dealing with the Trump era, Tim Allen comparing being a conservative in Hollywood to living in Nazi Germany, Morrissey selling James Baldwin “Black Is How I…

Comedian extraordinaire and writer for TV Land’s Younger, Eliot Glazer joins Ronna & Beverly to chat about the times when his sister Ilana & his NY accent comes out, why hot yoga is his life, the significance of his Bea Arthur tattoo,…