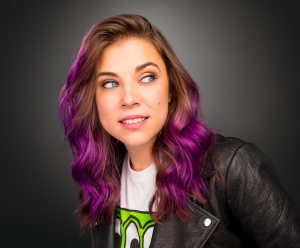 Eliza Skinner is originally from Richmond, VA and started her performing career as an unnamed child revolutionary in a production of Evita. She is now a stand-up comedian and has appeared on The Pete Holmes Show, @Midnight, Chelsea Lately, Upload with Shaquille O’Neal,  MTV, Showtime, AMC and the BBC. In his Reddit AMA, Patton Oswalt called her one of his favorite up-and-coming comedians. Last fall, Eliza was a writer and correspondent on Totally Biased (produced by Chris Rock), and her Funny Or Die videos have been retweeted by President Obama (seriously.) She is a regular performer at the UCB in LA and NYC, and this year she was selected to be one of the “New Faces Of Comedy” at the Montreal Just For Laughs Festival.

Comedian extraordinaire Eliza Skinner joins Scott to talk about her debut comedy album “Regarding My Lovers,” when suddenly Grax, Eater of Worlds interrupts to issue an apology. Plus, Jefferson Milkyway stops by to talk about designing the courses for the Westminster Kennel…

One, Two, Tree with Eliza Skinner

Jess and Zach and special guest Eliza Skinner create a new musical all over the internets about Ken Burns and trees and love! With songs like "No More Ads", "Believe What You Know About Trees" and "Who Documents the Documentarian?", this episode…

372: Grindr’s Press Head Resigns, Why the Gender Gap is Worse Than We Think

Guest co-host Eliza Skinner is back for a threepeat on this week’s Throwing Shade! Eliza and Bryan usher in the new year with stories of dating, hookups and breakups before getting into the hottest topics. First, we’ll hear about the resignation of…

Guest Co-host Eliza Skinner joins Bryan again this week to talk Janet Jackson’s induction into the Rock and Roll Hall of Fame and more! First, they discuss the decision by Congress to make its members pay out of pocket for sexual harassment…

The incredible comedian/improviser/writer Eliza Skinner joins Bryan as guest co-host this week to get deep into the latest headlines! First, they tackle the rollercoaster ride of Kevin Hart’s apology for his homophobic tweets followed by the responses by female comedians after their…

It's OFF BOOK 's one-year anniversary and we have a blow out episode with all your favorite characters old and new! With Scott Aukerman, Paul Scheer, Paul F. Tompkins, Nicole Parker, Zeke Nicholson, John Hartman, Erin Whitehead, Eliza Skinner, Tawny Newsome and Ashley Ward, plus…

Paul F. Tompkins is elated that you downloaded another episode of Spontaneanation! This time out, Paul’s special return guest is comedian/improviser/writer Eliza Skinner of Drop the Mic and Cool Playlist! They chat about what crime she would commit, the fun of jamming…

Musical improv veteran Eliza Skinner joins Zach and Jess this week for a new meet-cute musical with all the ups and downs of true love, plus a girl named Melissabeth. With songs like "Let's Be Sister Wives", "(Gotta Have) An App That's Passed",…

Presenting “Pet Helpers” by Eliza Skinner. When a plan to scam people into buying pet insurance for the Rapture goes awry, it’s up to Mimi (Eliza Skinner) and her roommate Jane (Jessica McKenna) to figure out what's going on and maybe save…

Kumail Nanjiani and Emily V. Gordon join Scott to talk about their new film The Big Sick based on their real life experiences, Kumail’s secret, and the exciting day to day in making a movie. Then, airport dispatcher Cooper F. Worthington-Tompkins stops…

Shootin’ puppies with Eliza Skinner. This episode is brought to you by Bombfell (www.bombfell.com/PARDO) and Generation Tux (www.generationtux.com code: PARDO).

Eliza Skinner: Rip Your Heart Out

Comedian and writer Eliza Skinner (The Late Late Show with James Corden) started her career in New York City’s improv scene where she hosted a rap improv battle for comedians. She often shared the bill (and basement venue) with Lin-Manuel Miranda and…

HDTGM All-stars Eliza Skinner and Ed Brubaker join Paul and Jason for a LIVE episode recorded at the world famous Largo at the Coronet in Los Angeles to discuss the 1996 superhero movie The Phantom starring Billy Zane. They will cover everything…

Sean Clements of Hollywood Handbook is back on this week's Comedy Bang! Bang! to speak on his love of reading lyrics, his thoughts on Melania Trump, and what it would sound like if his character Tervis were to have made an appearance…

This is a discovered transmission from Eliza Skinner, a survivor of the incident. Eliza has been broadcasting a podcast from her van and it now has been 30 days since the incident has wiped out most of the population of the city.…

Inside a 40 Year-Old Woman's Purse

Paul F. Tompkins welcomes all, the many, the few, the high, and the low back to SPONTANEANATION! This week, Paul's special guest is comedian/improviser/writer Eliza Skinner of Turnt Up! and The Late Late Show with James Corden! They chat about the glamour…

Comedian Eliza Skinner of the Angry Little Goats podcast join Sarah & Susan to talk about The Fox and the Hound, Wicked, [title of show], FALSETTOS!, and complicated friendships.

The very funny Eliza Skinner and Zombeavers director Jordan Rubin join Paul & Jason to talk about the most seemingly normal but insane film Safe Haven. They’ll discuss how the movie feels like it’s made up of scenes that you would want…

This week's WHOOCH has fill in Ku-Ku aka guest co-host Emily V. Gordon & special guest Eliza Skinner joining Howard for the first recording in the new Earwolf studio! A discussion of Rotten Tomatoes & parent leads everyone to jump into the…

Get Your Profound On!

She's a threepeat offender here on Totally Laime and today she gets profound! Comedian, actress, writer, and podcast host (coming soon: Get Your Cry On) ELIZA SKINNER came by and blew our minds in the best way by discussing Iyanla, validation thru…

Ever wanted more debates about half-boners on podcasts? Then look no further as Eliza Skinner returns with tales of her cat’s close relationship with a stuffed rabbit, gross bachelor parties, and catching people have public hotel sex. Also, Elizabeth has a revelation…

Why thank you, kind listeners, for joining us this week for The Apple Sisters. We are here to talk to you about etiquette in the most genteel and polite way we know how. Our guest is the delightful Miss Manners who teaches…

Her voice is as sexy as she is - no wonder she's the first lady of musical improv. ELIZA SKINNER stops by and engages Elizabeth in a HARD CORE rap battle.  Can you guess who wins? ENJOY.