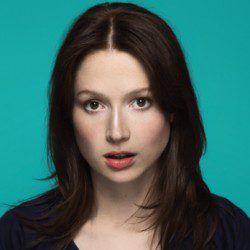 Ellie Kemper portrayed naïve receptionist Kellie Erin Hannon on NBC’s “The Office.” Kemper first gained attention with her one-woman show, “Feeling Sad/Mad,” at the Upright Citizens Brigade and has worked with the popular publications The Onion and McSweeney’s. In film, Kemper co-starred in the Nicholas Stoller comedy “Get Him to the Greek” and Sofia Coppola’s “Somewhere” and most notably, the smash hit “Bridesmaids.” Originally from St. Louis, Missouri, Kemper attended Princeton University and divides her time between New York and Los Angeles.

This week we’re breaking down “Secretary’s Day” and the ladies chat with the wonderful Ellie Kemper (Unbreakable Kimmy Schmidt, Bridesmaids) who played Kelly Erin Hannon! It’s Secretary’s Day and Andy convinces Michael to take Erin out to lunch to celebrate her being the…

Actress Ellie Kemper feels thrilled about being Conan O’Brien’s friend.   Ellie sits down with Conan to talk about mining sincerity for comedy while starring in The Office and Unbreakable Kimmy Schmidt, Conan’s rowdy relationship with her husband Michael, and her upcoming…

Married couple Ellie Kemper (Unbreakable Kimmy Schmidt) and Michael Koman (Nathan For You, Late Night with Conan O’Brien) join Conan writers Mike Sweeney and Jessie Gaskell to talk about Michael meeting and becoming friends with Ellie during her time as an intern…

Ronna & Beverly visited the Big Apple and had a fantastic time! Listen as they welcome comedians Ellie Kemper (Unbreakable Kimmy Schmidt) and Wyatt Cenac (People of Earth) for a grand ol' time recorded live from The Bell House in Brooklyn! What…

Ellie Kemper is the definition of young at heart! Ellie joins Ronna & Bevery in the Earwolf studio to chat about the wonderful cast of Unbreakable Kimmy Schmidt, why she hasn’t joined Twitter, meeting her husband when she did bits on Late…

Sean and Hayes throw back the curtains on the industry by playing a game of Gmail Roulette and prepare listeners for any type of Hollywood meeting during Let’s Do Lunching. Then, ELLIE KEMPER graciously lends us her time as she recalls old…

We all love Ellie Kemper. From The Office to Bridesmaids, her cheery smile has brightened big screens and now we're using her melodious voice to talk about pole dancing, coach punching, and fish advocating. Ellie has traveled from St. Louis to Princeton…