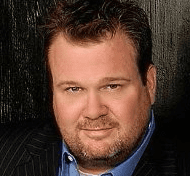 Eric Stonestreet is an American actor, best known for his starring role as Cameron Tucker on the ABC comedy Modern Family. Stonestreet has received critical acclaim for his performance on Modern Family, which has earned him two Emmy Awards for Outstanding Supporting Actor in a Comedy Series, with three nominations.

Modern Family’s Eric Stonestreet joins the esteemed first timers club on this week’s Comedy Bang! Bang! Eric expertly tells us how to troll Instagram, the lessons he learned from Tina Fey & Del Close in Chicago, and why a spontaneous Z-snap might…

We get deep into the Kansas City lore with fantastic comedic actor Eric Stonestreet of Modern Family on today's Sklarbro Country! We'll hear about how sports played a major role of Eric's life growing up in Kansas City, the time he played…