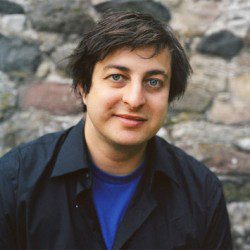 Eugene Mirman will someday be known as the man who single handedly shut down Time Warner with his hilarious jokes. Until then, he is known as one of the finest working comedians. His albums The Absurd Nightclub Comedy of Eugene Mirman, En Garde, Society!, and God is a Twelve-Year-Old Boy with Aspberger’s have staked their claims on many a “Best Of…” list. I worry, because the word count for this won’t be long enough to include everything else he’s done. So just look him up. Promise me you will?!

Recorded live as part of The Boston Jewish Film Festival at the Somerville Theatre in Boston, the fabulous Eugene Mirman of Bob’s Burgers joins Ronna and Beverly to chat about growing up speaking only Russian, crying for 45 minutes as part of…

Stand-up extraordinaire Eugene Mirman aka 1/3 of the Titans of Comedy returns to tell us all about his new 9-volume comedy album "I'm Sorry (You're Welcome)" on this week's Comedy Bang Bang! Eugene goes into what you can find in his new…

Randy and Jason welcome to the show Eugene Mirman who talks about his new seven LP, nine volume album, I'm Sorry You're Welcome, as well as the inspiration for his character Gene on Bob's Burgers. Then, Daniel Van Kirk covers headlines that…

Comedy Bang Bang is always trying to do great things for mankind, whether through helping out a poor delinquent child or bringing in amazing comedians for us all to enjoy. This episode does both! Claire Woodruff (who does not have a robot…