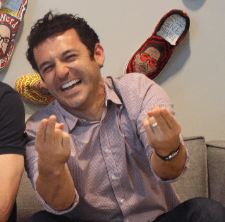 Fred Savage is an actor, director and producer of television and film. He is best known for his role as Kevin Arnold in the American television series The Wonder Years and as the grandson in The Princess Bride. He currently voices Noah in Generator Rex. In later years, he has directed and produced numerous episodes of television series, such as Ned’s Declassified School Survival Guide, Hannah Montana, and Phil of the Future, as well as the primetime series Ugly Betty, It’s Always Sunny In Philadelphia, Modern Family, Happy Endings and 2 Broke Girls. He also directed several episodes of the Starz pay-per-view cable series Party Down.

Doing It The Savage Way

What would you do if I sang out of tune? I'd tell you to shut up because we have actor and director Fred Savage on the show and he's giving us secrets and scoops from the set of The Wonder Years as…

Fred Savage, you may remember him from Kevin Arnold from "The Wonder Years", and the grandson in "The Princess Bride", and he's done his fair share of voice acting, to boot!