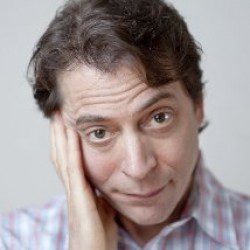 Fred Stoller is an American stand-up comedian, actor, writer, voice artist, and comedian. He broke into comedy during the boom period of the 1980s and was on every television show that would feature stand-ups. He is best known for his frequent guest starring as Gerard on the CBS sitcom Everybody Loves Raymond. He has also made guest appearances on several additional TV series as well as having written two episodes of Seinfeld. He also wrote about his time as a writer on Seinfeld in his Amazon Kindle single, “My Seinfeld Year,” which can be purchased by going here: http://www.amazon.com/Seinfeld-Year-Kindle-Single-ebook/dp/B006Z499M0

Killing time with Fred Stoller. This episode is brought to you by Mack Weldon (www.mackweldon.com code: PARDO), Silicon Valley on HBO.

Queen Latifah & Dolly Parton were in a gospel filled musical with so many plots that it will make your head spin! Fred Stoller joins us to talk about the strange heart attacks that kill of two characters in the movie, the…

The one and only Fred Stoller is here to rant about Best Week Ever, hipsters pretending to be nerds, and Dennis Miller on today’s episode of THE FOGELNEST FILES! Fred shares his love of character actors, expands on some of the amazing…

Fred Stoller does not hold back during this week’s Sklarbro County! Fred drops in to talk about being the 10 day contract guy, loving to root against the empire, and being mistaken as a guy who can’t drive. Dan Van Kirk brings…