Gaby Dunn is a writer and stand-up comedian in Los Angeles. Gaby’s writing has appeared in The New York Times Magazine, Cosmopolitan, New York Magazine, The Boston Globe, Playboy, Thought Catalog and on NPR’s On The Media, Mashable, Glamour, xoJane, Salon, Slate, ROOKIE, Jezebel and ABC’s Nightline. I am also the author of the Thought Catalog e-book Maybe In Another Universe, and I have interned at The Daily Show and at Elementary on CBS.

Gaby Dunn and Peppermint join Negin to provide insight on what Amy Coney Barrett's nomination could mean for the LGBTQ+ community, including the particular challenges transgender people face. They also react to Trump's COVID diagnosis and the end of 'Keeping Up With…

The (Not So) Charitable Cheat with Gaby Dunn 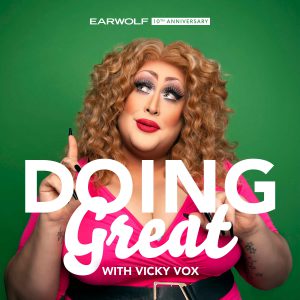 **TW for mention of suicide** Author, activist and comedian Gaby Dunn joins the show to talk about everything from queer community to to alienx. From the lack of wigs in stand-up to the fact that everybody in film and television thinks they're…

This week has absolutely everything you need: Matt and Dave's literary corner, Dave's meet-cute story and the prolific Gaby Dunn. The guys chat with Gaby about her Patrick Swazye tattoos, Idina Menzel, Adele Dazeem, Fried Green Tomatoes, Chris O'Donnell, being better than everyone else in high…

Negin is joined by Gaby Dunn and Griffin Newman to discuss the impeachment inquiry, the 2020 Democratic candidates, and the ethics of taking money from monsters.   This episode is sponsored by Vistaprint (www.vistaprint.com code: FAKE2).

Comedians and writers Gaby Dunn and Allison Raskin of Just Between Us join Andrew and Tawny to discuss a caller’s question about not trying to call out their racist grandparents because they’re going to die soon anyway, the anti-abortion movement being a…

The stock market is even more powerful than you realize. Which is saying something, right? Much like Han Solo is pretty sure he can imagine infinite money, you believe you know the world’s combined wealth is mighty. But did you know a…

Comedian Gaby Dunn sits down with Cameron to discuss YouTube's impact on the entertainment industry, shadow culture, and how society can influence our decisions. This episode is sponsored by TomboyX (www.tomboyx.com/QUEERY code: QUEERY), EverlyWell (www.everlywell.com/QUEERY), and Zola (www.zola.com/QUEERY).

This week, Bryan focuses on the first ever Pride festival to take place in Columbus, Indiana - also known as the hometown of Mike Pence. We’ll hear how protestors made sure the VP’s visit to Savannah for St. Patrick’s Day was filled…

Allison Raskin and Gaby Dunn join Andrew to discuss the Trans military ban, Trump saying police officers should hit suspects, The Mooch, and much more. As always, leave us a message about anything you think is racist at (323) 389-RACE.

Andrew Ti brings Yo, Is This Racist? to UCB-Sunset for a LIVE episode with special guest Gaby Dunn! They talk about Vijay Chokal-Ingam (Mindy Kaling’s brother) pretending to be black to get into medical school, Furious 7, tanning, wanting to be one…

Andrew Ti and special guest Gaby Dunn finish the week off by discussing a caller who’s white step father insist he is not Mexican after finding out that his biological father was adopted. As always, leave us a message about anything you…

No Topic Off Limit

On today's episode, Andrew and Gaby Dunn talk about off color jokes and comedians who say no topic should be off limits. Don't forget to keep leaving us messages by calling (323) 389-RACE.

Gaby Dunn & Andrew talk about black women and butts. Be sure to keep leaving us messages at (323) 389-RACE.

Gaby Dunn & Andrew discuss a caller getting their feelings hurt and why you can't be racist against white people. Make sure to leave us a message about anything you think is racist at (323) 389-RACE.

Gaby Dunn & Andrew discuss how it came to be that Andrew now owns the world's best, and most racist cup.

Andrew Ti and special guest Gaby Dunn finish the week off by discussing Australian rapper Iggy Azalea’s rapcent. As always, leave us a message about anything you think is racist at (323) 389-RACE.

Is Race A Social Construct?

On today's episode, Andrew and Gaby Dunn talk about people who believe race/gender is a social construct. Don't forget to keep leaving us messages by calling (323) 389-RACE.

Gaby Dunn & Andrew discuss what is an appropriate for a baby name. Be sure to keep leaving us messages at (323) 389-RACE.

Gaby Dunn & Andrew talk all about Indian weddings. Make sure to leave us a message about anything you think is racist at (323) 389-RACE.

Comedian and writer Gaby Dunn joins Andrew Ti all this week to answer some racism questions. Today they talk about if it's racist that the French treat black people from the United States differently than black people from Africa. Be sure to…