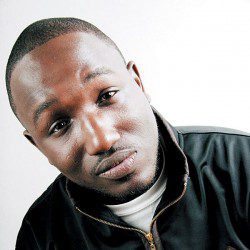 Hannibal Buress is a comedian, actor, writer, musician, magician, and poker dealer from Chicago. His third hour standup special Comedy Camisado is currently streaming on Netflix. He is also a cast member on Comedy Central’s hit series Broad City, as well as the co-host of Adult Swim’s The Eric Andre Show. Buress is a favorite on the latenight circuit and has written for NBC’s Saturday Night Live as well as 30 Rock. He is set to appear in the upcoming film version of Baywatch as well as the much-anticipated feature Spider-man: Homecoming, and he recently lent his voice to the animated films The Secret Life of Pets and Angry Birds. He tours regularly doing stand up comedy. There’s other stuff on Google that you can find. Have a nice day.

(This is a rebroadcast from 3/13/2015. As the Put Your Hands Together team takes a break during the month of December, we invite you to enjoy this gem from our archives.) Phenomenal sets from Hannibal Buress, Howard Kremer, Nicole Byer, Cori Gonzalez-Macuer,…

Hannibal Buress joins Paul, June, and Jason to discuss the 1985 martial arts film The Last Dragon. Recorded live from Colossal Clusterfest in San Francisco, they talk about everything including how insecure Sho’nuff is, the glow, and Eddie Arkadian. This episode is…

Hannibal Buress joins Chris on a call with a college freshman who is a lover of comedy struggling to find romance in his life. Should our caller ditch school and try his hand at comedy? Why were Chris and Hannibal crying last…

Randy and Jason discuss a woman who included her hatred for Chicago Bears quarterback Jay Cutler in her obituary. Comedian Hannibal Buress joins the Sklars to promote his new special, "Comedy Comisado," which premiered on Netflix. They discuss gambling, Chicago sports teams…

Todd Glass might be the most seriously funny person. And by that I mean even when he's talking about his dog dying or asking for Twitter advice, it's hilarious. Hannibal Buress drops some bon mots, and Sarah Silverman is fortunate enough to…