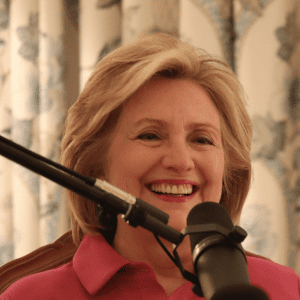 Hillary Diane Rodham Clinton is an American politician, diplomat, lawyer, writer, and public speaker. She served as First Lady of the United States from 1993 to 2001, as a United States senator from New York from 2001 to 2009, and as the 67th United States secretary of state from 2009 until 2013.

Former Secretary of State Hillary Clinton feels enthusiastic about being Conan O’Brien’s friend.   Hillary sits down with Conan to talk about launching her new podcast You and Me Both, overcoming the double standard for women in the public eye, and the need…

Former First Lady and Secretary of State Hillary Clinton and daughter Chelsea Clinton feel great (but a little apprehensive) about being Conan O’Brien’s friends. Hillary and Chelsea sit down with Conan to discuss the stories that inspired them to co-write The Book of…