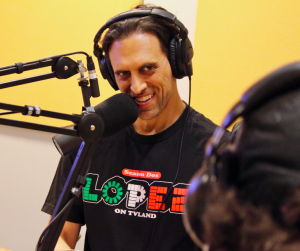 Howard Kremer is a comedian. He’s performed stand-up on COMEDY CENTRAL and JIMMY KIMMEL LIVE. He’s appeared on many shows including AUSTIN STORIES, SCARE TACTICS, @MIDNIGHT, COMEDY BANG! BANG!, TAKE MY WIFE and BAJILLION DOLLAR PROPERTIE$. He has written for the shows HUMAN GIANT, PRETEND TIME, THE GOODE FAMILY, BEAVIS AND BUTTHEAD and LOPEZ. He is the founder of the HAVE A SUMMAH movement. He is rapper DRAGON BOY SUEDE. He has 9 albums on iTunes. You can find Howard Kremer with Kulap Vilaysack every Wednesday hosting WHO CHARTED right here on Earwolf!

Howard Kremer brings on some of your favorite comedians to discuss the top 5 songs and movies of the week. Plus, Howard, the guests and Who Charted crew each bring a new song that they recommend over all the garbage on the charts.

Howard Kremer joins Matt Besser to break from the traditional improv4humans format with a special Music Picks episode! Howard and Matt’s music opinions collide as they discuss and debate their top tracks from 2019. Plus, Matt spills the beans on the origin…

HDTGM presents a Holiday re-release of the classic Reindeer Games episode with a special introduction from Paul and Jason! Join us this Christmas as we discuss one of the worst holiday-themed movies to come out two months after December, Reindeer Games.  We…

17 Hit Songs That Are Secretly (Or Openly) Insane

Top 40 radio: it’s like if a robot became obsessed with our collective subconscious. And it’s always been dominated by fun, sunshine-y pop songs. Stuff like “Respect” (Aretha Franklin) and “Hey Ya!” (OutKast) and “Maniac” (that dancing movie). But are those songs…

Welcome back to Who Charted? with Howard Kremer and Kulap Vilaysack! Howard and Kulap guide you through the charts of the week and help listeners learn what is hitting in music and movies. On this week’s very special episode, Howard’s twin sister…

Paul F. Tompkins welcomes the Anaheim audience to Spontaneanation, recorded in front of a LIVE audience at The Now Hear This Festival! This week, Paul’s special guests are Kulap Vilaysack and Howard Kremer of Who Charted! They chat about the first joke…

Hayes and Sean have to reprimand a crazed fan. Then HOWARD KREMER joins the guys to organically discuss a service they all love. This episode is sponsored by Five Four Group.

Howard Kremer & Kulap Vilaysack of the fellow Earwolf podcast Who Charted? are both here with separate amazing projects to share with us as well as the return of intern Gino Lambardo on today’s Comedy Bean Bag! After Gino gives us his…

Celebrate July 4th with Ronna, Beverly, and Who Charted’s own Howard Kremer! They'll chat about Howard’s career before Who Charted, the origin of the name Kremer, who gets inside his heart, and who the woman version of Howard would be. Plus, the…

The Who Charted? Files

Who Charted’s Howard Kremer & Kulap Vilaysack joined Jake for a visually stimulating livestreamed episode of THE FOGELNEST FILES! Jake, Howard, and Kulap created forcefields, stuck it to Chuck Woolery, and got a peak into the toilet community by taking a toilet…

Uh oh, Dragon Boy Suede is back in the Laime house!! Our wonderful 2nd time with Who Charted's Howard Kremer covers topics from bathroom hand washing to traffic theories to getting back in the dating game. Enjoy!

Who Charted’s Howard “Dragon Boy Suede” Kremer & fan favorites Paul Rust, Harris Wittels, and Michael Cassady aka Don’t Stop or We’ll Die are in the studio to jam out in today’s very special musical b-b-b-bonus s-s-s-show! They’ll get into what the…

Paul F. Tompkins, Howard Kremer, and Shelby Fero aka The Jaws Family are back for the thrilling conclusion of Analyze Fish! After something shocking happened during Shelby’s first viewing of Jaws, she decided to watch it a couple of more times in…

Prepare your earholes for Building The Track Pt. 3! Today's guest on Rafflecast is none other than Howard Kremer aka Dragon Boy Suede. In 20 minutes they created the song "Shotgun Trukk (If Drive Was A TV Movie)". It's Howard/Jon, Son! Cyrus…

Harris Wittels and Scott Aukerman are back to catch up on Harris’ recent Phish experience and to pass the figurative torch. Paul F. Tompkins and Howard Kremer are comedians who love the 1975 classic film Jaws. Paul & Howard have decided to…

Join us this Christmas as we discuss one of the worst holiday-themed movies to come out two months after December, Reindeer Games.  We talk about terrible open-mouthed kissing, how much Ben Affleck likes pecan pie, and a strange cameo by Ashton Kutcher.…

Yo, what up race cars! Today's guest Howard Kremer joins Andrew Ti to determine if "nice" white people doing hip-hop covers is racist. We also discuss why white people using the words ninja and nilla is straight up wack. Call in at…

Yo, what up y'all! Our guest Howard Kremer helps us explore the topic of red head discrimination and answer the question if there is such a thing as red-headed solidarity/ginger pride. If you want to leave us an equally befuddling message, call…

Yo, what up race cars and race debaters! Howard Kremer is in studio today to help us answer if a Farmers Market sign that reads "Wild Food For Urban People" is racist. We also discuss the use of the word urban in…

Yo, what up race cars! Today we are joined by Howard Kremer to discuss if white people using the N-word is racist. Call 323-389-7223 and leave us a voicemail if you want to ask us if something is racist. No robots please.

Welcome to Yo, Is This Racist? with Andrew Ti! Join Andrew Ti as he answers one of your questions every day about whether something is racist. Spoiler Alert: It almost always is totally racist. Howard Kremer joins us today to figure out…

We're feasting on Keyshawn wine, Taco Bell, and outrageous new stories as Howard Kremer joins us in Sklarbro County. You'll learn how to write the perfect obituary, get banned from children's theme parks, and find viral videos of attractive Olympians online. You…

Howard Kremer is definitely upping our cool factor! He's a comedian and rapper and the host of the awesome podcast Who Charted? where he and Andy fell into brotherly love five long weeks ago. He talks malls, widow sex, butt sex, and we…

Randy and Jason are out on the road so it's time to call in the 12th man...and the 13th man...and the 14th woman. Matt Besser, Howard Kremer, and Danielle Schneider are slapping some paint on their faces and getting in the gridiron!…

Howard Kremer is the guest on this week's Sklarbro Country, and you'll love it more than Mohammed Al-Fayed loves Michael Jackson. Howard has all the qualifications for a Sklarbro citizen: He loves sports, he's an awesome rapper, and he has wicked Muppet…

You can't get three guests better than Matt Walsh, Dave Holmes, and Howard Kremer. Unfortunately, for much of the time at least one of them is missing. Radio Disney sends over one of their most famous DJ's, Lil' Timmy, who brings up…

It only took Scott twelve, count 'em, TWELVE episodes to get an Emmy nominee on the show! And that nominee is the fine sir Jon Hamm. He talks about being famous, blah blah blah, and assists El Chupacabra by helping him advertise…