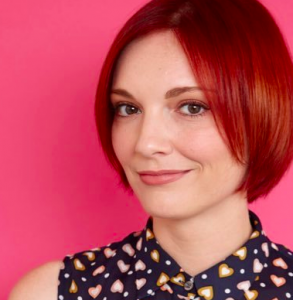 A Southern belle from Dallas, Texas, Jackie has been a comedienne and performer since she entered this world. She has a booming, deep voice that won many beauty pageants in the singing category, but also got her scolded by every teacher she’s ever had. She can’t help it that her voice carries! A performer since she was 3, Jackie was nicknamed “Little Patsy” by the locals due to her soulful singing resembling Patsy Cline. She packed the house at the Garland Opry and brought tears to many eyes. Jackie later attended the University of Texas at Austin and received a BS degree in Radio Television & Film. Her acting career officially began when she landed a recurring role on the Aaron Sorkin dramedy, STUDIO 60 ON THE SUNSET STRIP. Jackie then found her comedy home at the UCB and has been performing main stage since 2008 when she was just a teeny baby in the original musical FREAK DANCE: THE FORBIDDEN DIRTY BOOGALOO written by Matt Besser. She reprised her role of Jezebel in the feature film version of the stage show. Other UCB stage credits include The Dirtiest Sketch Contest, Other People’s Stuff, Mix tape, What’s Going On with Mike Mitchell, Welcome Sinners, Oscar Winners: Revealed, Sketch Cram, Let’s Do This, UCB Cagematch, The It Sucked Awards, Sketch Showdown, and etc. She’s an alum of the Maude Sketch team GOODMAN, the Winners of the 2012 UCB Odyssey. Her most fulfilling UCB gig combines both passions, singing and comedy: currently performing and writing on the Quick & Funny Musicals Company. She has written such musicals as Walter White & The Amazing Blue Crystal Meth, The Best Little Hoarder House in Texas, and Catfish: The Musical. Other acting credits include: The Birthday Boys, Comedy Bang Bang, The feature film INHERENT VICE, and national campaigns for such brands as Sears, McDonald’s, Dodge, and Applebee’s. Jackie is also passionate about the environment, and shames her friends when they drink out of single-use plastic bottles.

The Krypto King with Jackie Johnson

Hello hello con-gregation! This week Jackie Johnson is breaking down the crypto currency ponzi scheme that was NOT a home run for investing MLB players. Also on the scam of the week, things on Shark Tank got phishy.  Research by Sharilyn Vera. Sources:  https://www.bizjournals.com/phoenix/news/2020/02/07/two-charged-in-cryptocurrency-investment-scheme.html [bizjournals.com] …

Jackie Johnson in Heaven Is A Drop of Jupiter: The Musical

Jackie Johnson (Natch Beaut) joins Zach and Jess for an all new musical packed with a heaven hotel, William Shakespeare, the Jupiter Council, and more. With songs like “Heavenly (Welcome to Heaven)”, “In My Heaven”, and “My Name Is William”, it’s a…

The Boys give JACKIE JOHNSON from the podcast Natch Beaut a makeover challenge. This episode is sponsored by Squarespace (www.squarespace.com/THEBOYS code: THEBOYS) and Harry's (www.harrys.com/handbook)

Jackie Johnson (Natch Beaut) joins Howard and the gang to count down the Top 5 songs on Spotify's United States Viral 50 chart, who is and isn't a "Chooch", influencer parties, the importance of sunscreen, and of course the top 5 songs…

Actress, writer and Natch Beaut host Jackie Johnson joins Jess and Zach for a wild new musical packed with nature, camping, fancy people in the mountains, chippity-choppity chipmunks, and sex with ghosts! With songs like "We Call It Lamping", "Let's Barter!" and "That's Wild", this…

Paul F. Tompkins makes it clear that none are unwelcome to Spontaneanation! This time out, Paul’s special guest is actor/comedian Jackie Michele Johnson of Natch Beaut! Jackie chats about what conspiracy she would start, the worst dog she’s ever walked, and her…

Howdy y’all and welcome back to Glam Gab with your host Susi Snodgrass Meyers (Jackie Johnson)! It’s the show all about makeup, beauty, and being an all around glam gal. This week Susie is joined by long lost sorority sister Stephanie Wetley.…