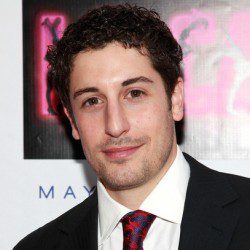 Jason Biggs is an American actor best known for his role as Jim Levenstein in the American Pie series. Biggs has been acting since the age of five appearing in “Drexell’s Class,” Broadway’s “Conversations with My Father,” and “As The World Turns.” He currently resides in Los Angeles, California.

The Bigg Episode with Jason Biggs

Jason Biggs is probably best known for starring in the American Pie films. He also has been married to the incredibly talented Jenny Mollen and has gotten to work with her in the new comedic film "Amateur Night." Jason joins Deanna and…

On a bonus episode of The Black List Table Reads with Franklin Leonard, we are proud to present a live script reading of Jacob Isser's "Hosers," a half-hour television pilot recorded at The Fast Company Innovation Festival in New York City. Hosers…

Jason Biggs gives us the stuff this week on Sklarbro Country! He helps us Sklarbritrate the situations with Ken Shamrock’s punching spree and Randy Travis’s church parking lot brawl. Jason also talks about living a double life as a child, his experience…

Actor, whose very memorable big break was as Jim in the American Pie series!