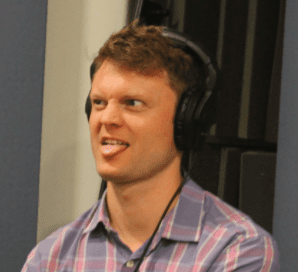 Jefferson Dutton is a writer and performer based in Los Angeles. He is a graduate of the film program at Ithaca College who started with the UCB Theatre after moving to LA in the fall of ’05. He is the bravest member of the sketch group The Birthday Boys, who debuted their show Hotdoggin in the spring of ’08 and currently present a new half-hour sketch show on the first Wednesday of every month (with sister group A Kiss From Daddy.) The Birthday Boys have performed in heaps of UCBT-LA shows including Comedy Death-Ray, CDR-Sketch, Crash Test and Two Ghostbusters Meet Two Ninja Turtles. They’ve also traveled the country, performing at Sketchfest NYC, Seattle SketchFest, Chicago SketchFest, San Francisco SketchFest and the Los Angeles Comedy Festival. On his lonesome, he has written for Disney XD and UCB Sketchcram, and has performed with some real loons. Jeff plays a variety of instruments and enjoys making giant props.