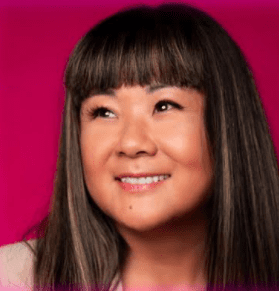 Jenny Yang is a Los Angeles-based writer and stand up comedian who produces the first-ever (mostly) female, Asian American standup comedy tour, Dis/orient/ed Comedy and has been a writer and performer on the viral Buzzfeed videos “If Asians Said the Stuff White People Say” (over 8 million views), “What if Adults had Tantrums Like Toddlers?” and the “Ask An Asian” video series. Jenny was dubbed one of Los Angeles’ “most fascinating people” of 2015 in LA Weekly’s annual “People” issue.  She was also a featured standup comic on Joan Rivers’ 2013 Showtime documentary Why We Laugh: Funny Women.

Looking for the best comedy podcasts? Earwolf Presents showcases our talented hosts and our favorite episodes from the Earwolf universe! Let us surprise you! Here is: Scam Goddess. In honor of Asian American and Pacific Islander Heritage Month, we are featuring an episode of Scam Goddess featuring…

What's Poppin' con-gregation? This week, Jenny Yang joins us to discuss the story, Action Park, an amusement and water park that was extremely dangerous and the home to a series of money laundering schemes, shady money and scams. Plus, a man is…

The SAP crew dishes on their celebrity crushes today versus 20 years ago (Indiana Jones and Punky Brewster are name-checked). Later on, Jenny Yang talks about her career progression from working on behalf of the labor movement to doing stand up comedy.…

Comedian and writer Jenny Yang returns to join Andrew for a special episode in which they discuss the film The Great Wall. As always, leave us a message about anything you think is racist at (323) 389-RACE.

Andrew Ti and special guest Jenny Yang finish the week off by discussing the Rhodesian Ridgeback. As always, leave us a message about anything you think is racist at (323) 389-RACE.

Jenny Yang and Andrew talk about having Oreo as a nickname. Don’t forget to keep leaving us messages by calling (323) 389-RACE.

Jenny Yang and Andrew discuss So You Think You Can Dance? street vs. stage dancing. Be sure to keep leaving us messages at (323) 389-RACE.

The hilarious Jenny Yang & Andrew talk about Chinese Dentist being a band name. Make sure to leave us a message about anything you think is racist at (323) 389-RACE.

Stand up-comedian and writer Jenny Yang joins Andrew all this week to answer some racism questions. Today they discuss a caller feeling guilty for being White and wanting to join a street game of Dominos in Harlem. Be sure to call us…