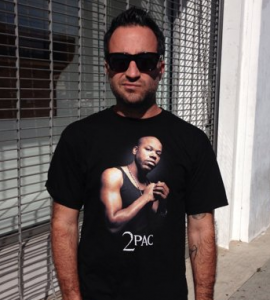 Jensen Karp, formerly known as rapper Hot Karl, is an LA-based writer, comedian, and co-owner of Gallery 1988, the nation’s leading destination for pop-cultured themed artwork. He has written and produced for Funny or Die, the MTV VMAs, The Late Late Show with James Corden, Rolling Stone, WWE Raw, The Hundreds, and the ESPYs. His book, Kanye West Owes Me $300 (and other true stories from a white rapper who ALMOST made it big) is now in stores and he’s an executive producer on the upcoming “Drop The Mic” battle rap TV show on TBS.

17 Overlooked Artists Who Deserve To Be Pop Culture Icons

“Hollywood” might be the most nebulous entity in America. It’s somehow a location and an industry and a big goofy hill-sign. It’s the source of all entertainment without entertaining us very often. And it’s where budding young artists flock to make it…

A Cast Reunion for the film The Net

Paul F. Tompkins says hi, hello, and what’s up to listeners on this week’s Spontaneanation! This time out, Paul’s special guest is Jensen Karp of Get Up On This and Drop the Mic! They chat about whether Jensen has ever gotten lost,…

Author, podcaster, and co-creator of Drop the Mic, Jensen Karp (Kanye West Owes Me $300, Get Up On This) joins Sarah and Susan to talk about growing up crying with his mom, Mike & The Mechanics’ “The Living Years,” the 1989 film…

Jensen Karp is a writer, fellow Earwolf podcast host (Get Up On This), art dealer, and a former rapper under the name Hot Karl. Jensen joins Nate this week to talk about his new book "Kanye West Owes Me $300: And Other…

HDTGM All-star Jensen Karp (Get Up On This, Kanye West Owes Me $300) joins Paul, June, and Jason in-studio to talk about the Sarah Michelle Gellar 1999 romantic comedy Simply Irresistible. Why is there so much unwarranted sexuality in the movie? Is…

Jensen is sick this week. Please continue to support his book "Kanye West Owes Me $300" by grabbing one over at www.jensenkarp.com!

Producer/podcaster/Renaissance man Jensen Karp joins Kulap and Stard on this week's Who Charted. They discuss Jensen's upcoming memoir, "Kanye West Owes me $300," during Stereogum's 5 Best Songs of the Week chart. They create a Hunger Games tournament for the excessive amount…

The wonderfully talented rap artist Nova Rockafeller joins Deanna & Emily along with Wolfpop darling/Get Up On This host Jensen Karp to talk about how Jensen started to manage Nova as a artist, their sort of father-daughter relationship, and why Nova decided…

Nova Rockafeller and Jensen Karp breeze on in to count down some charts with Howard and Kulap, and talk about Nova's new EP, Problem Child, on this week's Who Charted!  On this week's episode, the crew discuss Iggy Azalea's butt and Nas'…

Jensen Karp is on a mission to use his encyclopedic knowledge of Hip-Hop to get us up on obscure moments from the world of Hip-Hop on this week’s episode of THE FOGELNEST FILES! Jensen tells us about his podcast Get Up On…

Hip-Hop heads are in for a treat as Jensen Karp returns to use his musical expertise to break down the charts on today’s Who Charted! He schools us on Trap Music during the Top 5 Billboard R&B and Hip-Hop Songs Chart, drops…

Have Fun With It!

There is no easy way to describe Jensen Karp other than fascinating. He was a rapper who loved The Simpsons, the curator of several pop culture art galleries, a marketer who worked on Lost, and he has some amazing stories about his…

Get Up On This

Jensen Karp is one of the most advanced chartists we've ever had on the podcast. As a rapper, designer, writer, and taste maker, his musical knowledge runs deep and we're thrilled to learn from him. He waxes poetic on the Best Hip-Hop…

Why can't more movies be like Crank 2? Sure it's racist, sexist, implausible and disgusting, but that's what makes it so much fun! Jensen Karp is our lucky guest in the studio with Paul and June (Jason is still in New York,…