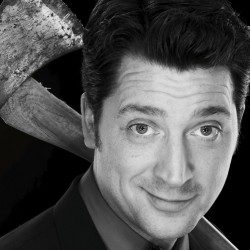 Jesse Falcon is an American improv and sketch comedy performer based in New York. He began his theatrical training at Albion College and has been a featured performer in numerous shows at the Upright Citizens Brigade Theatre since 1998 — most notably Switchblade Pussycats, Girl Crush 2040, and Telethon. Jesse has done sound-alike voiceovers of Dave Grohl and Carson Daly on MTV’s Celebrity Deathmatch. He is also Marvel’s Director of Merchandising.

This week's episode forecast...a freeze is coming! Matt Mira (The Goldbergs) and Marvel’s Jesse Falcon join Paul, Jason, and June to discuss the 1997 film, Batman & Robin. They discuss Superhero butt shots and how this movie can be seen as a really…

Superhero butt shots, bat nipples, and freeze puns are all up for discussion on this week's How Did This Get Made? The Nerdist podcast's Matt Mira and Marvel's Jesse Falcon join us to chat about a movie that easily can be seen…