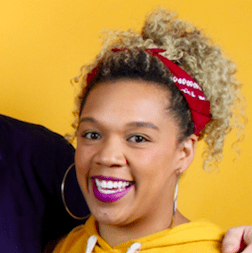 Jiavani Linayao performs musical improv and many other forms of comedy. She can be seen at UCB in shows like Baby Wants Candy: The Improvised Musical, Asian AF, Gaysian AF, Shamilton: An American Musical and more. She can be seen on Netflix in Between Two Ferns: The Movie. Jiavani’s heritage is mixed: Filipino and Black. She was born in Germany and grew up in Hawaii, Washington state and San Diego. Jiavani openly identifies as queer, or pansexual. She can be found on Instagram @jiavani

136 — Jiavani Linayao in Shuffle Off To Buffalo: The Musical

Jiavani Linayao (Between Two Ferns: The Movie, Baby Wants Candy) joins Zach and Jess for an all new musical packed with dreamers, friendship, train barons, and more. With songs like “Shuffle Off To Buffalo”, “I’ll Know When I Get To Buffalo”, and “The Track To Friendship”, it’s the perfect companion for your next train adventure!

Comedian Allen Strickland Williams joins Scott to talk about traveling through tunnels, how he actually lived his new Comedy Central Half Hour Presents, and the unreleased Woody Allen film he’s in. Then,  entrepreneur Mary Lisa returns to talk about the new data based business she pitched to Shank Tank. Plus, sports manager Carter Meza stops by to get help with asking a girl to the middle school dance.

619 — The Stars of Between Two Ferns: The Movie

Zach Galifianakis, Lauren Lapkus, Ryan Gaul, Jiavani Linayao of Between Two Ferns: The Movie join Scott to talk about the numbers on the call sheet, improvised scenes that didn’t make the final cut, and the most fun/worst day working on the movie. Then, musician Clint Screams stops by to talk about some of his hits. Later, small business man Ichabod Gordy Bradbury drops by to spread the word of the lighthouse. Plus, educator The Artful Dodger stops by to talk about the origin of his name.

Paul F. Tompkins welcomes everyone back as Pride Month continues on Spontaneanation! This time out, Paul’s special return guest is Natalie Morales of Parks and Recreation! Natalie chats about why her favorite teacher has changed over time, being given Pepsi and condensed milk as a child to gain weight, and a story about the hottest teacher at her school. Then, they are joined by improvisers Mano Agapion, Jiavani Linayao, and Oscar Montoya, to improvise a story set in Parrot Jungle, A Parrot-Only Zoo in Miami, FL. And as always, Eban (only the best) Schletter scores it all on piano!