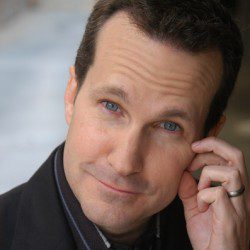 Jimmy Pardo has appeared on such shows as “The Tonight Show”, “Conan”, “The Late Late Show” and his own half hour special on Comedy Central.

His comedy is primarily improvised and he is well known for his crowd work.

Utilizing those trademark crowd work skills, Jimmy spent the last 6 years as Conan O’Brien’s opening act at “Conan” tapings. Jimmy has also appeared on “Conan” as a panel guest, a field correspondent and recently filled in as co-host. He also conducts the unconventional celebrity backstage interviews for Teamcoco.com’s “The Pardo Patrol.”

Over the years Jimmy has also been seen on such shows as “Comedy Bang Bang”, “@Midnight”, “Maron” and “Monk”. He hosted “National Lampoon’s Funny Money” for Game Show Network, four seasons of AMC’s “Movies at Our House,” and episodes of NBC’s “Late Friday”, VH1’s “The Surreal Life” and “The Playboy Morning Show”. Most recently he was the host of the critically acclaimed Science Channel show “Race To Escape”.

Jimmy has recorded three comedy albums: “Uno,” “Pompous Clown” and 2013’s “Sprezzatura,” which Entertainment Weekly named one of the 5 Best Stand-Up Albums of the year.

From the producers of Never Not Funny, "Playing Games with Jimmy Pardo" is a funny and fast-paced pop culture trivia game show hosted by comedian and veteran game show host Jimmy Pardo (National Lampoon's Funny Money, Race to Escape). Joined by a different celebrity guest co-host every week, Jimmy welcomes three call-in contestants and puts them through their paces, testing their knowledge of movies, TV, music and headlines from the last five decades. The one who makes it to the final round will compete against our celebrity guest to win a fabulous grand prize, but the real prize is all the laughs delivered along the way!

Never Not Funny is an award-winning weekly podcast hosted by comedian and TV personality Jimmy Pardo and producer Matt Belknap. Since 2006, the show has offered comedy fans the unique opportunity to eavesdrop on freewheeling conversations between Pardo and his sometimes famous, always funny friends. Unscripted. Unedited. Unstoppable. It's Never Not Funny. Looking for the archives? All episodes older than 6 months can be found exclusively on Stitcher Premium, ad-free. Go to stitcher.com/premium and use promo code EARWOLF for 1 month free (and $5 off the annual plan!)

Today the Nicks try to make a million dollars by learning how to do a live version of the podcast. The incredible Jimmy Pardo, host of Never Not Funny, explains exactly how it’s done. Jimmy shares a ton of great tips and…

Jimmy Pardo aka the Pod Daddy joins Scott to talk about celebrating the 1000th episode of his podcast Never Not Funny, the Oscars, and The Bee Gees. Then, Crystal Del Rey Jenner drops by to talk about recently chaperoning her son’s trip…

Comedian and podcaster Jimmy Pardo talks with Andy Richter about (un)healthy family boundaries, first theatrical roles, preempting the comedy podcast boom with Never Not Funny, and discovering his own unscripted stand-up persona. Plus, Jimmy shares the only note he ever received as the…

Jimmy Pardo and Eliot Hochberg in Four People Who Decided To Eat Food: The Musical

Jimmy Pardo and Eliot Hochberg (Never Not Funny, Jimmy’s Records & Tapes) join Zach and Jess for an all new musical packed with a cul-de-sac of loners for Thanksgiving, talking pies, and more! With songs like “Dinner For Just Me”, “I Think…

Streaming services revolutionized the TV-watching experience. There’s no denying it! Everything’s different now that we have Netflix, Hulu, Amazon Prime Video, and the three new companies that launched while you were reading this sentence. There are now lots of ways to watch…

The Juice Is Loose

Comedian and friend of the show Jimmy Pardo of Never Not Funny joins Scott to talk about a cut CBB TV scene he was in, mixtapes they used to make for each other, and his Forrest Gump story. Then, football star O.…

Comedy podcast Godfather Jimmy Pardo of the Never Not Funny Podcast joins Conan writers Mike Sweeney and Jessie Gaskell to talk about how he initially refused the job to be the warm-up comedian for The Tonight Show with Conan O’Brien, why he…

Mike and Jessie present a special clip for Season 2 of Playing Games with Jimmy Pardo now available over at the Never Not Funny feed!

Actor, stand-up comedian, and podcast host Jimmy Pardo (Never Not Funny) joins Howard and co-host Jamie Denbo for this week’s Who Charted! They’ll discuss getting over Halloween scares, Cardi B’s arrest, and where the love of the 80s comes from while counting…

Never Not Funny's own Jimmy Pardo joins Scott to talk about his new podcast Playing Games with Jimmy Pardo, Houdini, and performing Grease. Then, best friends Jake and David stop by talk about their friendship and being bullied in school. Later, Hollywood…

Sean and Hayes have JIMMY PARDO as a guest to play games like on his new show, Playing Games with Jimmy Pardo.

In another edition of I Wasn’t There Too, professional comedian and Never Not Funny host Jimmy Pardo joins Matt to talk about being cut from the 2006 musical drama Dreamgirls. Jimmy goes deep into how his role of comedian was offered to…

Jimmy Pardo (Never Not Funny) wouldn't dream of entering the Room Where It's Happening without the foremost Hamilton expert in his life: his 9-year-old son, Oliver. The father son-duo discusses getting hooked on Hamilton together, how they manage the occasional curse word…

Live at Now Hear This with Jimmy Pardo

Ronna and Beverly come to you live from the Now Hear This Podcast Festival with Never Not Funny's Jimmy Pardo! They'll chat about what makes a good late night talk show host, baseball players, and amusement parks. Plus, we hear what happened…

Never Not Funny’s Jimmy Pardo and SNL alum Paul Brittain are back to reminisce about the good times in the Windy City of Chicago on today’s Comedy Bing Bong! Jimmy also breaks down the rules of his new TV show Race to…

Kulap and Howard recap their weekend, travels, and artistic endeavors. Then, Jimmy Pardo joins the gang with a 27 year old bit that stars Tony Danza and a sneak peek into how he will "bury the hatchet" with Hilary Swank. Also, in…

Tig, Kyle, and David kick things off by talking about when they would like to retire. Then,  the professional Jimmy Pardo is in the hatch to discuss his expertise of Fantasy Baseball, being in 3 different Fantasy leagues, wheeling & dealing, and…

Take To No Camera

Podcast legend and angel voiced singer, Jimmy Pardo, joins the Sklar Brother's for Sklarbro Country's 4 year anniversary show! Tune in to hear the guys talk Arena Football, the beginnings of Jimmy's podcast, and how to assess a comedy line-up. Plus, Jimmy…

Adam Scott Aukerman slow it down once again this week as they are joined by Never Not Funny's Jimmy Pardo to discuss his personal legacy with U2. They’ll talk about when Jimmy first heard of the band, watching them perform at the…

What Does the Fonz Say?

Never Not Funny host Jimmy Pardo is back to chat about Twitter snitches, how much money he made in 1990, and his award winning podcast Never Not Funny joining Earwolf on today's b-b-b-onus episode of Comedy Bing Bong Theory! Then, Voda the…

Never Not Funny is a weekly comedy podcast hosted by Jimmy Pardo and produced by Matt Belknap. On this episode, Scott Aukerman joins in on the fun.

We're never not thankful here at Comedy Bing! Bong! and this week is no exception as Never Not Funny's Jimmy Pardo returns along with first timer/singer-songwriter Bill Callahan! Jimmy gives us the deets on the 5th Annual Pardcast-a-thon and Bill performs songs…

Down In And Up!

He's the hilarious (and truly never not funny) host of Never Not Funny - stand up comedian JIMMY PARDO came on and discussed his feelings about dreadlock-mohawks, his childhood friend Blow Job Bob, and why he will never ever shush someone in…

Beverly revisits her Halloween harassment by disgruntled neighborhood children. Ronna & Bev talk to Jimmy Pardo about opening for Conan, his own very successful podcast, and mistaking the sex of his baby.

Jimmy Pardo came to Earwolf to record Who Charted? and we couldn't let him leave without a good solid brain-picking on the world of podcasting. His show Never Not Funny played (and continues to play) such a important role in the growth and…

It's a starlight night here in the chart orchard and we've got three musketeers here to prep you with some charts before Halloween: Howard, Kulap, and our special guest Jimmy Pardo! Jimmy logs off the Chicago message boards for long enough to…

On a hot summer day, what could be better than chilling out with a bunch of bros? Nothing, that's what! Rob Delaney, Jimmy Pardo, and Paul Rust join Scott for the ultimate Comedy Bang Bang chill sesh. They play some games, chat…

Folks, it's true: This whole time, Randy Sklar has been impersonating his brother Jason, and vice versa. Will you forgive us if we give you an awesome Sklarbro Country with Jimmy Pardo and Tiger Woods? We thought so! Jimmy brings his sharp…

The day after Thanksgiving, most people are too hung-over and full to do anything hilarious. This is not true for Michael Cera, James Adomian, Jimmy Pardo, Nick Kroll, and Paul F. Tompkins. Also, Harris is there. Learn about the history of Thanksgiving…