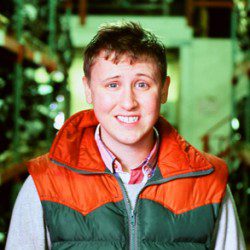 Johnny Pemberton is a stand-up comedian from Rochester Minnesota. He is also the host and writer for the MTV series “Megadrive.” He can be seen in “21 Jump Street,” “The Watch,” “This is 40,” and Armando Ianucci’s Oscar nominated film “In The Loop.” He has also appeared on ABC’s Jimmy Kimmel Live!, Lopez Tonight, FX’s It’s Always Sunny in Philadelphia, The Sundance Channel, and AdultSwim. In the future he will be seen on the ABC comedy “The Family Tools” playing the role of “Mason.” Johnny also hosts the podcast “Twisting the Wind” and is not the inventor of Coca-Cola.

Actor/comedian Johnny Pemberton arrives this week to help out Howard and Kulap with their fashion choices! They count down Stereogum's Top 5 Songs of the Week while Johnny explains why he's never recognized for "Son of Zorn" and why Kanye would benefit…

The titular Johnny Pemberton of FOX’s Son of Zorn and the titular middle child Eden Sher of ABC’s The Middle join the CBB First Timers Club! They join Scott for some Seinfeld trivia, Disney history, and to do elevator pitches for Eden’s…

Weird Hearing Super Powers You Didn't Know Your Mind Has

It's underestimated how important your sense of hearing is, how much it affects your daily life in ways you don't fully appreciate. Take the inconceivable geometry you do in your head all the time, thanks to your ears. Say you're standing with…

Sean and Hayes are extremely pissed about having to do so many Ice Bucket Challenges all week. On the bright side, they talk about some very exciting development opportunities involving newspaper comic strip properties. Then guest JOHNNY PEMBERTON arrives to speak on…

Listeners with a green thumb are in for a treat as the stylish Johnny Pemberton joins Ku-Ku and Wie-Wie on this week’s Who Charted! Our music chart is Billboard’s Top Selling Albums and features an important Bieber/Frank Ocean discussion. While the movie…