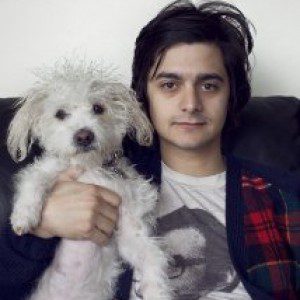 Josh Fadem, a master of physical and off-kilter comedy. Fadem is a ball of comedic energy on stage, with his performance colored by his unique style of stand-up comedy and improv. Fadem is often literally tripping on stage and getting battered by the stage equipment. In addition to his physical comedy, Fadem is known for his celebrity impressions and his hilarious delivery of conventional punchline-y jokes. Over the past few years, Fadem has made his way into film and television. His television appearances include 30 Rock, Eagleheart, The Tonight Show, Reno 911, The Whitest Kids U’ Know and It’s Always Sunny in Philadelphia. Fadem had roles in the films, Calvin Marshall and Miss March. Fadem is a regular performer at the Upright Citizens Birgade Theatre. He hosted and performed at the popular weekly live stand-up show, Comedy Bang! Bang! Fadem can also be seen performing his screwball brand of stand-up comedy at other popular shows at UCB as well as at a range of venues in Los Angeles.

This week, Kulap is joined by guest host Armen Weitzman, who explains why he’s now hosting with an open heart. Then, they welcome Josh Fadem, who was kind enough to bring his uncle Josh to explain his thoughts on modern day music and cell phones. Additionally, the gang debates what steps Johnny Depp could take to revitalize his career. Lastly, Josh explains how Space Jam 2 went from the shelves to viral sensation.

The Hooray Show returns after a week off with comedian Josh Fadem. We pull back the curtain on Josh as he lets us know his very specific technique of fishing for compliments. We then find ourselves in Chicago with Chad trying to buy Grateful Dead tickets off of two guys who can definitely “hook him up”…. with just about anything.

Andrew Ti and special guest Josh Fadem finish the week off by discussing White people loving Black Dynamite. As always, leave us a message about anything you think is racist at (323) 389-RACE.

Josh Fadem and Andrew talk about the use of the word black and dark to refer to evil things. Don’t forget to keep leaving us messages by calling (323) 389-RACE.

Josh Fadem & Andrew talk about salsa being in the International food isle instead of being with the other condiments in the grocery store. Be sure to keep leaving us messages at (323) 389-RACE.

Josh Fadem & Andrew talk about the use of the “T word.” Make sure to leave us a message about anything you think is racist at (323) 389-RACE.