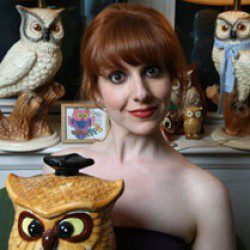 Julie Klausner is a former writer for VH1’s Best Week Ever, host of the popular podcast How Was Your Week (named one of the best 10 comedy podcasts of the moment by Rolling Stone), and author of I Don’t Care About Your Band which is currently being adapted into a television series. She has also written for publications such as The New York Times, The A.V. Club and writes a “Fuck/Marry/Kill” column for The Hairpin.

QUEENIE and The Boys make a horror anthology series.   This episode is sponsored by Squarespace (www.squarespace.com/THEBOYS code: THEBOYS), Harry's (www.harrys.com/handbook), and Quip (www.getquip.com/theboys).

JULIE KLAUSNER fills in as co-host after The Boys get into a big fight This episode is brought to you by Mack Weldon (www.mackweldon.com code: THEBOYS), My Sheets Rock (www.mysheetsrock.com/THEBOYS), and Away (www.awaytravel.com/theboys20).

Tom and Julie, Our Talkshow Friends

Sean and Hayes have a little fun doing a talkshow with JULIE KLAUSNER and TOM SCHARPLING live at The Bell House.   This episode is sponsored by Casper Mattresses (www.casper.com/savings) and LinkedIn (www.linkedin.com/THEBOYS).

Sean and Hayes are joined by JULIE KLAUSNER once again for a big scoop. This episode is sponsored by Simple Contacts (www.simplecontacts.com/theboys code: THEBOYS).

Sean and Hayes are joined by JULIE KLAUSNER to do a tribute with music. This episode is sponsored by Casper Mattresses (code: THEBOYS) and Harry's.

Sean and Hayes are once again joined by JULIE KLAUSNER to help them prepare a show that will win the upcoming Tony Awards. This episode is sponsored by Harry's (www.harrys.com/hollywoodhandbook) and Chapman University (www.chapman.edu/grad).

The boys do another insane challenge they learned about on the computer, then JULIE KLAUSNER joins the show to help them with a new project.   This episode is sponsored by Shari's Berries(www.berries.com code: HOLLYWOODHANDBOOK) and MVMT Watches (www.mvmtwatches.com/hollywood).

Julie Klausner joins the boys again to reminisce on her past episodes and get a little political. Then, Sean does some of his classic impressions and the gang picks their Mt. Crushmore.

Hayes and Sean are brought to the studio against their will for an unscheduled record. This episode is sponsored by Nudist Colony Clothing.

Hayes and Sean speculate as to some other interesting superheroes who could be fighting each other in a movie. Then JULIE KLAUSNER joins the team to redo her celebrated musical episode of the show except not with Dave Matthews this time.

It's scorching hot outside so Sean and Hayes are blessing their fans with a trip back to the Teaser Freezer with a breakdown of the new film "We Are Your Friends". Then, JULIE KLAUSNER from Hulu's Difficult People stops by to talk to…

Amy Poehler and Julie Klausner are a fabulous duo of writers, performers, and producers who recently collaborated on the Hulu series "Difficult People" (Julie as its creator and star, Amy as executive producer). This week they join Sarah and Susan for a…

How Was Your Week’s Julie Klausner brings the much needed lady energy to this week’s Sklarbro County! Julie tells us about which weird celebrity sighting she’d love to see, writing for the 3rd season of Funny Or Die’s Billy On The Street,…

Get ready for a raucous good time as Jake welcomes Julie Klausner, Jon Hendren, and Shelby Fero to a live edition of the Fogelnest Files! Recorded at the UCB theatre, Jake and his guests dive into Rick Dees and his disco duck,…

STOP. RESET. This might be the sexiest/dirtiest movie we’ve done! Special guest Julie Klausner joined us to talk about The Devil’s Advocate on this week’s How Did This Get Made? LIVE at the Bell House! We cover everything from Keanu’s multiple southern…

Fellow podcasters and first timers Julie Klausner and Jake Fogelnest are here on today’s Comedy Bang Bang! Jake & Julie recall the first time they met, each describe their podcasts “The Fogelnest Files” and “How Was Your Week” respectively, and share their…

Sklarbro Country is filled with lady energy this week thanks to our guest Julie Klausner! Julie tells us about being a pop-culture nut as a kid, how Patton Oswalt urged her to start her podcast, and why her twenties mirrored the show…

Given Howard's affinity for reds, we were more than happy to have Julie Klausner bring her New York hipness and Jewish nerdyness to Who Charted? for a look at the Billboard Heatseekers Chart and Movie Chart. We know she doesn't care about…

The debut episode of The Ronna & Beverly Podcast.