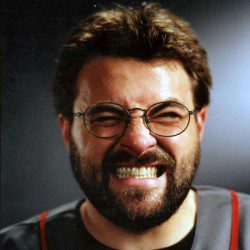 Kevin Smith is an American screenwriter, actor, film producer, and director, as well as a popular comic book writer, author, comedian/raconteur, and internet radio personality best recognized by viewers as Silent Bob. Smith also co-hosts several weekly podcasts that are recorded at various locations around the world and released on SModcast Internet Radio. He basically does it all and more.

Join Kevin as he sits down with former guest Kevin Smith (Mallrats, Dogma) who is determined to make an impact this visit. Smith chats about being told his career was over since day one and how there is no failing as long…

The multitalented Kevin Smith is Jeff’s guest for this episode of The Wolf Den. Kevin says that he’ll always be called “director Kevin Smith,” but the truth is that he’s “done way more podcasts” than films. He tells Jeff why he got…

Kevin Smith comes prepared with his Kenneth Branagh & Salma Hayek impressions on this week’s How Did This Get Made? Kevin joins Paul, Jason, and June to share his early involvement with a Superman movie that reveals the origin of the giant…