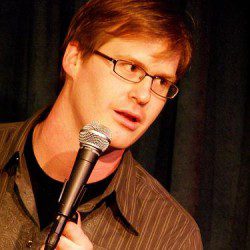 The unique and always hilarious comedian and writer Kurt Braunohler shares more than Kevin bargained for... This episode is brought to you by LightStream (www.lightstream.com).

Comedians, actors, and married couple Kurt Braunohler and Lauren Cook join Sarah and Susan to talk about the ending part of Okja, Anne of Green Gables, The Time Traveler’s Wife, and Whitney Houston singing “I Will Always Love You.” This episode is sponsored by Of…

Comedian Kurt Braunohler joins Randy and Jason this week to catch some Country waves! We hear about a naked track team drop-in and an NHL player who tussles with teens before the Sklars dive in deep with Kurt. They chat about his…

Comedian and podcast host Kurt Braunohler joins Scott to show off his fancy New York vocabulary, tell us about his new comedy special, and help figure out the length of a dog's month. Later, cyclist Johnny Bikes drops by to share tips…

Comedian Kurt Braunohler makes his return on this week's episode of Sklarbro County. He dishes on breaking into the scene from a background in non-traditional comedy and tells of his cross-country jet-ski trip before the Sklars get into some stories. Daniel Van…

He's a hilarious comedian with a kick ass podcast on the Nerdist called The K-Ohle, KURT BRAUNOHLER came on and discussed alternative simulated universes, wether or not the pubes match the curtains, and oh yes, there is LOTS more discussion about the…

Kurt Braunohler takes a break from the Japanese band he had no idea he was in to count down some charts with Ku-Ku and a tardy Wie-Wie! Kurt shares one of his many dream ideas while counting down Billboard’s Japan HOT 100…

Andrew Ti and this week’s special guest Kurt Braunohler finish off the week by discussing a story on NPR that could have came across as patronizing to the black youth of South Side, Chicago. As always, leave us a message about anything…

Today Andrew & Kurt Braunohler explain why we should stop all the spirit animal talk. Don’t forget to keep leaving us messages by calling (323) 389-RACE.

Andrew & Kurt Braunohler get into a discussion on whether Paula Deen is getting a ton of criticism just for being a woman or for not apologizing for her racist comments. Be sure to keep leaving us messages at (323) 389-RACE.

Kurt Braunohler & Andrew Ti celebrate the 200th episode of Yo, Is This Racist? by talking about a wack ass Republican party float. Make sure to leave us a message about anything you think is racist at (323) 389-RACE.

The straight up hilarious Kurt Braunohler joins Andrew Ti this Monday to figure out why someone would categorize Vincent Price’s monologue in “Thriller” as rap. Be sure to call us at (323) 389-RACE to ask if anything is racist.

You’re invited to join us in your viewing positions for yet another incredible LIVE edition of THE FOGELNEST FILES! Recorded LIVE at UCB-LA, Jake Fogelnest welcomes East Coast comedians Kurt Braunohler, Joe Mande, and Gabe Liedman to get acquainted with the Hip-Hop…

The fantastic stand-up/improviser Kurt Braunohler rides the waves to the calming shores on today’s Sklarbro Country! Kurt tells us about his fascination with creating sketches in the dark with Kristen Schaal, his on the fence bit of still being breastfed at the…