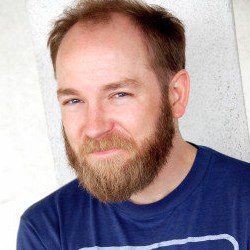 Kyle Kinane has a beard and writes jokes. Very good jokes. His jokes can be found on John Oliver’s New York Stand-Up Show, Mash-Up, his very own Comedy Central Presents, and his album Death of the Party. His beard is also very good. I’d say if you had to compare the quality of his jokes to the quality of his beard….yeah, the jokes would probably win. But the beard is still good!

Comedian Kyle Kinane joins Sarah and Susan to talk about seeing LCD Soundsystem at Outside Lands, watching the movie The Bucket List while in Las Vegas, and walking around 30 Rock alone after taping The Tonight Show. This episode is brought to…

Throw It On the Floor

Comedian extraordinaire and voice of Comedy Central, Kyle Kinane is back on the show to settle the debate with Scott on how long it’s been since he’s been on Comedy Bang! Bang! They’ll chat about his previous attempts at naming his new…

Comedian Kyle Kinane returns to the County this week to regale the Sklars with a Sonic Burger Adventure. We hear stories from Daniel Van Kirk about a pig-mask wearing couple that shot lasers at Pokemon hunters, how the Bee Gees saved the…

Two of the world's best comedians and pals from Chicago, Kyle Kinane & Matt Braunger are on today's Comedy Bing Bong! Scott & Matt do some long form improv, Matt tells us all about his new comedy special “Big Dumb Animal,” Kyle…

Kulap and Howard start off the show by debunking the facade of Hollywood Death Tours and offering some ideas of their own for what tourists should really be looking to do in Tinseltown. Then, the gang welcomes to the show Comedian Kyle…

Kyle Kinane is tailor made with the skills to tackle the kind of stories that occur on Sklarbro County! Kyle talks to us about his thoughts on WrestleMania, being onstage at Zanies in Chicago as a fight broke out, and getting immediate…

Death of the Party

Are you prepared for the thrilling conclusion of Howard's T.G.I. Fridays swinging story? Are you nervous in anticipation of what new quizzes we've thought up? Are you a fan of the comedic stylings of Kyle Kinane? The answer to all those questions…

He's a hot young stand up who is making waves in the comedy world and is making us laugh our asses off  - KYLE KINANE is also incredibly cool and kind, proof being that he agreed to come on our podcast just…

Welcome to Jamrock, I mean Comedy Bang Bang: The Podcast! Scott counts down the best songs of the year, and of the Christmas season, with his friends Paul F. Tompkins and Kyle Kinane. They wind down the year discussing their favorite Christmas…