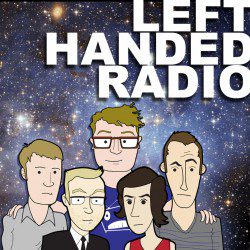 Left Handed Radio is a sketch comedy podcast written and performed by five sensitive artists: Adam Bozarth who has appeared on the Onion News Network and McSweeney’s Internet Tendency, Dan Chamberlain who performs sketch at the UCBNY Theatre and produces mashups as Chambaland, Matt Little who has written for The Late Show with David Letterman and SNL (in addition to his own stand-up), Taylor Moore who continues in the theme of comedy writer/director/actor, and Anna Rubanova who is an aspiring television writer and performer in the improv team Sandino.

In the immortal words of Boyz II Men: “It’s so hard to say goodbye to yesterday.” Our third place contestant is “yesterday” for the sake of this metaphor. Who will get the bronze metal? Our Aussie friends down in The Little Dum Dum Club? Our crazy sketch guys and gal at Left Handed Radio? Elizabeth and her husband Psychic Andy of Totally Laime? Listen in and find out!

Dave Anthony and Matt Belknap are two major figures in the world of podcasting. Dave co-hosts Walking The Room, the “comic’s comic” of podcasting. Matt co-hosts Never Not Funny, one of the longest running podcasts around. They know full well what it’s like to be in a time crunch and they’re here to see which of our remaining three podcasts can deliver in a pinch. Join us tomorrow as three becomes two and we inch ever closer to crowing a winner of The Earwolf Challenge.
– Show quoted text –

Our top three competitors have been given their biggest assignment yet: One hour to interview Zach Galifianakis as part of an editing challenge. Too bad it isn’t going to happen. This week we test our challengers on their ability to bounce back after a guest cancellation in a short amount of time. Listen in today to hear Matt “coach” the podcasters through the most important hour of their life, and join us tomorrow to hear their Time Crunch submissions with guest judges Dave Anthony and Matt Belknap.

Four podcasts become three as we reach the end of the week. Only one podcast is safe this week making it one of the toughest eliminations yet. Who will go home? You’ll have to listen to find out. And as always, leave your thoughts and critiques on our forums.

Both Doug Benson and Harris Wittels are experienced podcast guests. Knowing what they know about podcasting and Nick Thune, what will they think of each show’s four minute submission? Only four shows remain, so no nit will go unpicked as we prepare for tomorrow’s elimination episode. Tune in tomorrow to see who is going home and which three podcasts will continue in the search for Earwolf’s next great podcast!

There is a good chance that some of you listeners found this show because of Paul F. Tompkins, Marc Maron, Paul Scheer, or some of our other well-known guests. This week we see how each of the contestants handle 10 minutes with comedian Nick Thune. Matt gives the contestants valuable advice on approaching guests with respect, so tune in tomorrow to hear how everyone fares with guest judges Doug Benson and Harris Wittels. Also, let us know on the forums if you would like a bonus behind-the-scenes episode.