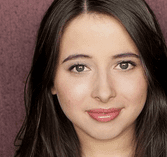 Esther Lauren Povitsky, also known as Little Esther, is an American stand-up comedian, actress and podcast host living in Los Angeles, California. Originally from Skokie, Illinois, and half Jewish, Esther was drawn to comedy at a very early age and considers herself a “theatrical comedian.”
Little Esther was the first female guest to appear on The Joe Rogan Experience, after which she began podcasting with DEATHSQUAD regularly. She hosted “Little Esther’s Piecast” and currently co-hosts “Brode & Esther” with fellow comedian Brody Stevens as well as Weird Adults with Little Esther.

LITTLE ESTHER and DAVE KING return to share the true meaning of love.

Comedian. actress, writer and producer Little Esther (Alone Together) joins Howard and Kulap for this week’s Who Charted! Esther explains how she found her way to a show on Freeform plus the best way to get your Vitamin D while helping the…

Sean and Hayes explain why Sean's voice sounds different this week, then are inspired by the great Beatles to take you through "A Day In the Life" of Alexander Payne. Then LITTLE ESTHER joins the boys for a discussion of who's pretending…

Little Esther is a very funny & nice stand-up comedian. She joins Jake this week to talk about collecting hot chicks, what was funny to her as a kid, some of the ghosts that appear in the Comedy Store at 2am, and…