Madeline Walter is an actor/writer who grew up in New Jersey and went to college in North Carolina at UNC-Chapel Hill. She’s thrilled to be performing at UCB with her Harold Team, Cardinal Redbird, her Maude Team, Bonafide, and her 3-lady improv team, Cat Ladies. She has been performing at UCB since 2010, in shows like Harold Night, Maude Night, Tripod (the improvised movie), Sketch Cram, Quick and Funny Musicals, and more variety shows than she can count. Her solo show, “I’m Doing Great!” (dir. Neil Campbell), ran for 6 months at UCB, and was performed at the Comedy Central Stage and the San Francisco Sketchfest.

Madeline’s acting credits include Weeds (Showtime), The Defenders (CBS), Childrens Hospital (Adult Swim), Garfunkel and Oates (IFC), Comedy Bang! Bang! (IFC), and The Birthday Boys (IFC). She has also appeared in many national commercials and exclusive videos for Funny or Die, Above Average, College Humor, The Nerdist, and Yahoo.

Madeline is a writer for a UCB Comedy Digital Writers Room, and she is currently developing a web series for The Nerdist. She has also written sketches that have been featured on the front page of Funny or Die and several original plays, which have been produced at the New York International Fringe Festival, Off-Broadway at the Fringe Encore Festival, and at the Mixtape and Friends of Friends Festivals in Hollywood. www.madelinewalter.com 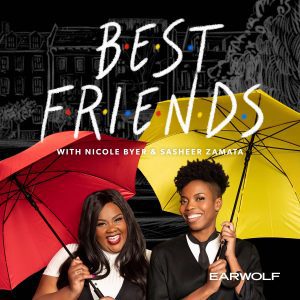 Sasheer is Unpacking The Peanuts with Paul Welsh & Madeline Walter

After Nicole tries to remember the title of this podcast, she and Sasheer are joined by best friends Paul Welsh & Madeline Walter (Brooklyn Nine-Nine)! Paul talks about people crossing boundaries to touch his thick hair, how he and Madeline met, Madeline’s…

Actress, writer, and comedian Andrea Savage makes a triumphant return to talk about the second season of her truTV show “I’m Sorry,” the freedom of total creative control, and peeing next to Michael Jackson. Plus, noted musician Jackson Maine stops by to…

The guys have had a very rough week -- some of Sam’s students have a complete mental breakdown and end up in “The Danger Zone”, Howard leans on a risky partnership to achieve his goals for the paper, Mr. Cravy falls back…

Lead singer of the iconic band Cameo, Larry Blackmon joins Scott for a one on one chat on a very special episode of Comedy Bang! Bang! They’ll get into the origin of Cameo’s smash hit “Word Up,” how Larry got involved with…

It’s been 9 amazing years of Comedy Bang! Bang! Where does the time go? Scott celebrates with show favorites under the watchful eye of his corporate supervisors. We’ll hear from returnees and newcomers alike including a professional employee, an adventurer, a developer…

Comedian Phoebe Robinson joins Scott to talk about the origin of her podcast-turned-HBO special 2 Dope Queens, her second essay collection ‘Everything’s Trash, But It’s Okay,’ and her latest workout routine. Then, television personality Mary Berry stops by to stomp out nasty…

Comedian Sarah Silverman is back and joins Scott to talk about her new Hulu show “I Love You, America,” Soarin’ at Disneyland, and to get a bit serious. Then, Charles Manson escapes from his hospital to tell us about his quest to…

Dogs, cats, cops, Geocities websites, smooth jazz, holograms and more are all in this new live musical with Carl Tart and Madeline Walter. With stand out numbers like "So Many People On This Enemy List", "Edible Arrangements" and "Plans & Meetings &…

Comedian Chris Gethard of Beautiful/Anonymous joins Scott and this week’s co-host John Lennon, formerly of The Beatles on Comedy Bang! Bang! They talk about Chris leaving his mark on movie sets, being given the role of Iron Man in Iron Man 3…

Tooth of the Sea

Stars of “Dropping the Soap” Jane Lynch, Kate Mines, and Paul Witten join Scott to talk about typical soap opera stuff and how they forged their friendships at a beauty supply store. Then, new daddy Curtis stops by to share the lessons…

After decades of using his knowledge to only benefit himself, Mark Wahlberg (Daniel Van Kirk) has teamed up with other celebrities and famous friends for “The Wahlberg Solution!" a round-table discussion of current news and events that will sort out the world's…

After decades of using his knowledge to only benefit himself, Mark Wahlberg (Daniel Van Kirk) has teamed up with other celebrities and famous friends for “The Wahlberg Solution!" a round-table discussion of current news and events that will sort out the world's…