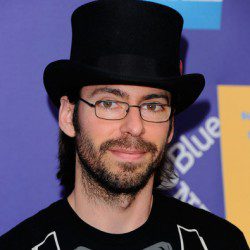 Martin Starr is an American television and film actor, known for his roles as Bill Haverchuck on the short-lived NBC comedy-drama Freaks and Geeks and as Roman DeBeers on the Starz comedy series Party Down. He has also played memorable supporting roles in some of the funniest cult shows and movies of recent years, from Judd Apatow movies like Knocked Up and Superbad to the 2009 cult hit Adventureland. Starr currently appears in Paul Scheer’s Adult Swim action series parody NTSF:SD:SUV, playing the unit’s resident computer genius.

THE OUTER REACH: Stories from Beyond

To listen to the entire premium series go to Howl.fm and use promo code REACH at check out. THE OUTER REACH: Stories from Beyond, is an anthology series inspired by pulp science fiction of the mid-century. In this distant future, space travel…

This week, actor Martin Starr (Silicon Valley) joins Randy and Jason for a special post-giving episode of Sklarbro Country. We hear about an enterprising NBA player and a revenge plot by Steve Francis during Takes followed by a chat with Martin about…

Martin Starr, Joe Wengert, Amanda Sitko and Mookie Blaiklock stop by the studio on this weeks improv4humans! They share their best police encounter and natural disaster stories before getting into the real heavy stuff regarding hobbies. Matt learns the meaning of the abbreviation…

Martin Starr remixes the charts and reveals his real name on today’s Who Charted! He tells us about how he occasionally raps with a Bluegrass band, shares his thoughts on Drake, and talks about changing a friend’s life in a strip club…

Word on the street is that Martin Starr of Freaks and Geeks, Party Down, and NTSF:SD:SUV:: is a first time guest on this week’s Comedy Bang Bang! You didn’t hear it from me but Martin joins Scott for a text session with…