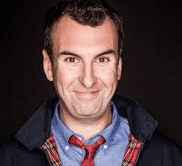 Matt Braunger is a stand-up comedian who studied improv under Del Close. He has brought his stand-up to Late Show with David Letterman, John Oliver’s New York Stand-Up Show, Chelsea Lately, and his very own album Soak up the Night. He played a major role in Comedy Central’s Mash-Up, and was a part of Comedy Central’s Hot List.

Comedian extraordinaire Matt Braunger joins Scott to talk about his new record “Please Hold Me,” filling up the hours to self generate, and married life. Then, book seller Lester Brads stops by to talk about his mobile book business. Plus, Murf and Dirt of Jack FM burst into the studio to record some bumpers.

Comedian Matt Braunger (Advice From A Dipshit) joins Andrew and Tawny to discuss white people naming their children “Indian” & “Harlem,” mimicking another person’s way of speech, and much more. As always, leave us a message about anything you think is racist at (323) 389-RACE.

John Hughes month continues on Cracked Movie Club! There’s no better way to celebrate Thanksgiving than by watching John Hughes’ 1987 film Planes, Train and Automobiles, his first adult-centered feature after a string of teen angst hits. Although not a big hit when it was released, the movie has gone on to be arguably Hughes’ best liked film, as well as one of the best liked films of its two stars, Steve Martin and John Candy (Candy’s terrible mustache notwithstanding).

On this week’s episode, Tom is joined by Cracked’s Michael Swaim and comedian Matt Braunger as they discuss how John Hughes’ classic road trip movie became an unspoken classic, how the film’s stars managed to perform a near 200 page screenplay without committing any major felonies, and whether or not John Candy’s character is actually a vampire.

Shacking up with Matt Braunger.

This episode is brought to you by Blue Apron (www.blueapron.com/NEVER).

Kevin and Kamau reunite in person as they welcome actor and stand-up comedian Matt Braunger to discuss the latest in Denzel happenings. They analyze Denzel clips, check out a Denzel fan reenactment, and debate which Denzel movie would be most appropriate on the cover of a lunchbox. Then, they address all things Denzel about the Golden Globes, and Matt shares how he developed his first comedy albums before listing his Top 5 Denzel Films. Finally, they dive into a discussion on “The Magnificent Seven,” noting how you deal with shootouts that never happened and who earns the title of “Most Handsome Man in the West.”

Andrew Ti and special guest Matt Braunger finish the week off by discussing The Ridiculous 6 and The Academy Awards. As always, leave us a message about anything you think is racist at (323) 389-RACE.