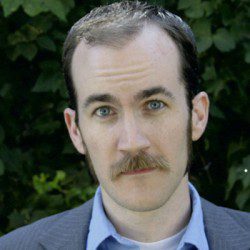 Mel Cowan began performing at the Upright Citizens Brigade Theatre in 2006, and has studied under Ian Roberts, Matt Besser, Matt Walsh, John Ross Bowie, Seth Morris, Sean Conroy and Owen Burke. He performs regularly with the long-running team Sentimental Lady and can also be seen inRough Cut: The Improvised Movie. He has been seen in various shows at UCB including thirty:30, Smug Rock Nation,Sketch Cram and wrote and performed with the Maude team Hot Mess. He has appeared in Reno 911!, Parks and Recreation, Free Agents and numerous national commercials. Through the magic of editing, he seems to be the one person who actually dies in the beloved children’s film Meet Dave, starring Eddie Murphy. He is a Texas native and a graduate from the University of Texas’ film program. He is currently working on several screenplays and a novel, and spends an inordinate amount of time with his dog and collection of odd musical instruments.

The guys from Sentimental Lady were so phenomenal on the podcast, we didn't have time to include all the great stuff they did. So here we are once again with an improv4humans bonus cut featuring Mel Cowan, Alex Fernie, and Johnny Meeks.…

If you live in Los Angeles, you have no excuse not to see the excellent improv troupe Sentimental Lady. If you aren't so lucky, you can get a taste of the magic as three of the members of this phenomenal group join Matt Besser…