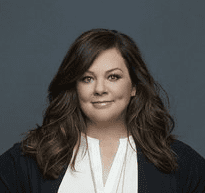 Melissa McCarthy is an American actress, comedian, writer, fashion designer, and producer. McCarthy first gained recognition for her role as Sookie St. James on the television series Gilmore Girls (2000–07). On the ABC sitcom Samantha Who? (2007–09), she portrayed Dena.

McCarthy achieved major success and fame for her breakthrough film role as Megan Price in the 2011 comedy hit Bridesmaids, which garnered her numerous award nominations including an Academy Award nomination for Best Supporting Actress, a BAFTA nomination and a Screen Actors Guild Award nomination for Best Supporting Actress. In 2014, McCarthy starred in the comedy Tammy and the comedy-drama film St. Vincent. In 2015, she headlined the action comedy Spy, for which she received Golden Globe Award for Best Actress – Motion Picture Comedy or Musical nomination. In 2016, McCarthy is set to star in comedy films The Boss and Ghostbusters.

Actor, comedian, and producer Melissa McCarthy feels just delightful about being Conan O’Brien’s best friend.   Melissa sits down with Conan to chat about getting her start in stand-up and at The Groundlings, catapulting to stardom with Bridesmaids, and producing the Netflix…