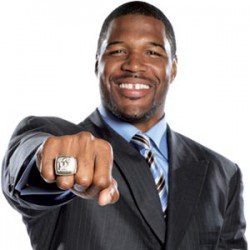 Michael Straham is a former National Football League defensive end who played his entire career for the New York Giants, where he set the record for the most sacks in a single season and won a Super Bowl in his final year. He is currently a football analyst on Fox NFL Sunday, and also a host for Pros vs. Joes alongside fellow Fox football analyst Jay Glazer. He also starred in and produced the sitcom Brothers.

Former NFL star turned TV darling Michael Strahan talks ladies of the night, marriage, football, and Tom Brady's looks with Ronna and Beverly. Stay tuned to find out if he shows off his tush.