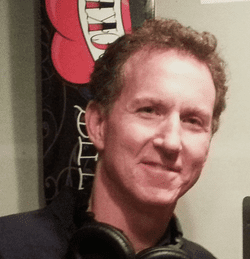 Mike Gibbons is an Emmy Award-winning writer and producer, best known as the co-creator and executive producer of Tosh.0 on Comedy Central. Gibbons other work includes: The Late Late Show with Craig Kilborn, The Showbiz Show with David Spade, The Academy Awards, The Ellen DeGeneres Show, for which he won an Emmy, and Lopez Tonight. Recently, Gibbons co-created and Executive Produced Sports Show with Norm Macdonald, Upload with Shaquille O’Neal and The Ben Show with Ben Hoffman. Currently Gibbons is working on HBO’s Brody Stevens: Enjoy It, which he created with Zach Galifianakis. He is also the sidekick on Greg Fitzsimmons podcast and radio show on Sirius Howard 101. He is a graduate of Boston University (BA) and New York University (MA).

It’s a podcast dream come true! Psychic Andy’s all time hopeful guest is here to charm us all - comedy writer, performer, producer MIKE GIBBONS came on and discussed first kisses, why discussing Maya Angelou was one of the most panicked moments…