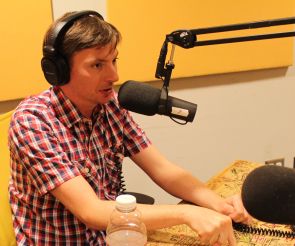 Michael Patrick O’Brien, is an American actor, writer, and comedian, who most recently was a writer on Saturday Night Live. O’Brien attended the University of Michigan, where he majored in film-video and was the founder and editor of a monthly comedy newspaper named The Anti-Daily. Michael is also known for his Hulu show 7 Minutes in Heaven.

Patton Oswalt, Mary Sohn, and Mike O’Brien of A.P. Bio join Scott to talk about the premise of the show, how many days each actor shoots on the show, and playing with the structure for the upcoming 3rd season premiering on Peacock. Then, thespians Bob and Cherilyn Wessex stop by to perform pieces from their plays.

Comedians and members of the entertainment elite Paul Scheer (How Did This Get Made?) and Michelle Biloon (The Biloon Podcast) join Scott to chat about novelty Monopoly board games, t-shirt canons, and the some of the shows on Paul’s new network TruLife TV. Later, youth pastor Kelly Burton stops by to tell us how he’s updating the bible for the modern era of at risk teens. Plus, actor Tyren Bigsby arrives to shadow Scott as he works on his craft for a new podcasting movie.

Brett Gelman was previously banned on the show but Scott has since lifted the ban on his old friend in order for him to tell us about his new Adult Swim special “Brett Gelman’s Dinner in America.” However, Brett seems as though he has something else on his mind that he needs to share about his dear friend. Later, pet medium Chris Dante arrives to communicate with Brett and Scott’s ghost pets. Finally, travel consultant Ydeda Elaine Brown stops by to give everyone some much needed travel tips.

This episode is sponsored by Wiener-Dog from IFC Films, Leesa.com, SeatGeek, Bonobos, and Stela.

Hayes and Sean bust into the Teaser Freezer for a hilarious look at the “By the Sea” trailer. Then MIKE O’BRIEN turns up to dish on SNL gossip and play some clips of the best sketches that didn’t make his new comedy album.

It’s Comedy Bang Bang’s first ever Double Header! Some times, half + half just equals one, and this episode is one of those times. In the first half, Bob Odenkirk stops by to talk “Better Call Saul” and extra special guest Reverend Robert Parsimony joins us to help save our souls. Then in the second half, David Cross stops by the talk about the new episodes of “With Bob & David” and special guest life coach Zin Bradley stops by to help us all get our lives back on track.

Howard and Kulap welcome Mike O’Brien who explains life as a writer on SNL, as well as why random hook ups are the key to learning your way around a new city. Additionally, the gang discusses the latest wedding fashion trends, some of the unique techniques behind great acting, and why Hollywood shouldn’t be so afraid to tell new stories. Later, Mike reveals who the best kissers were on his show 7 Minutes in Heaven. Lastly, the gang receives some special gifts from the home of John Cougar Mellencamp.