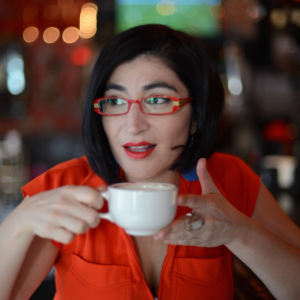 Negin Farsad is an American comedian, actor, writer and filmmaker of Iranian descent based in New York City. Like most comedians, she has a Masters Degree in African-American Studies. She was named one of the 53 Funniest Women by the Huffington Post, one of 10 Feminist Comedians to Watch by Paper Magazine, and was selected as a TEDFellow for her work in social justice comedy. She has written for/appeared on Comedy Central, MTV, PBS, IFC, Nickelodeon and others. She is director/producer of the feature films 3rd Street Blackout, starring Janeane Garofalo and Ed Weeks, Nerdcore Rising starring Weird Al Yankovic and The Muslims Are Coming! starring Jon Stewart, David Cross and Lewis Black.

Hosted by Negin Farsad, Fake the Nation is all the comedy about politics without any of the politics about politics. Every week Negin and a cast of her funniest, smartest and most politically astute friends (John Fugelsang, Lizz Winstead, Dean Obeidallah and others) gather 'round the political roundtable to break down the news, make you laugh, think, and deliver a gut punch to the American political system. Looking for the archives? All episodes older than 6 months can be found exclusively on Stitcher Premium, ad-free. Go to stitcher.com/premium and use promo code EARWOLF for 1 month free (and $5 off the annual plan!)

Bryan and Erin welcome 2018 with open arms as they catch up after their new year festivities! Bryan discusses a new development in the HIV/AIDS Presidential Advisory Council situation: everyone got fired! They try to wrap their heads around the travesty that…

If you're a movie fan in 2017, you're hard pressed to find many original sci-fi films. There are a lot more Alien: Covenants and Blade Runner: 2 0 49s than Ex Machinas. That's not necessarily a bad thing, it's just sometimes sci-fi fans…

Mark & Pete welcome Negin Farsad from Earwolf's "Fake The Nation" as they process the wild early days of the Trump administration. Pete posits that Donald is forever stuck in the New York City of the 1970's, Mark wants to replace everyone's…

Comedian Negin Farsad on esoteric allergies, the power of fire hydrants, and growing up Muslim ... all in this edition of Kids' Unanswerable Questions.To find kid-friendly versions and join the conversation go to longestshortesttime.com! This episode is brought to you by Madison…

Comedian, author, and podcaster Negin Farsad (Fake the Nation , How to Make White People Laugh) joins Sarah and Susan to talk about having to cry for the movie 3rd Street Blackout, crying onstage while performing stand-up, Grey's Anatomy, Me and Earl…

Negin Farsad of Fake the Nation joins Andrew to talk about current trends including the 2016 Debates, how you should reply to someone on Tinder, and much more. As always, leave us a message about anything you think is racist at (323)…

Denzel Washington Is The Greatest Actor Of All Time Period #90August 25, 2016

Comedian, actress, and writer Negin Farsad joins Kevin and Kamau this week to discuss the 2013 film "2 Guns." Negin explains how she ended up majoring in African-American Studies, what it was like to grow up Iranian in Palm Springs, and the…

What did Negin Farsad discover when she and a group of other Muslim-American stand up comedians toured the "American Heartland"? The further removed she was geographically from bleeding heart liberals, the more open people were to discuss race relations without worrying about…

How Do You Get Over Social Anxiety?

Negin Farsad joins Stephen and James again today, and we learn that while all three are some sort of professional public speaker, it remains the group's greatest source of social anxiety. Listen on as our hosts self-deprecate while extolling their fears, including…

How Do You Make White People Laugh?

What happens when an Iranian-American comedian from Southern California decides to make a leap into the publishing world by writing a book about how to entertain Caucasians? We find out today as cultural polymath and new Earwolf podcaster Negin Farsad returns to…

Comedians and presenters Negin Farsad, Lizz Winstead and John Fugelsang sat down in the Earwolf studio to talk about guns and gun violence, and offer up some solutions.